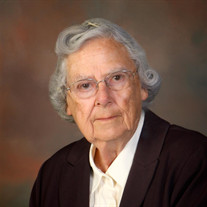 Wilma Wioma (DeGarmo) Ferguson was born March 23, 1929 in Haigler, Nebraska, to Glen DeGarmo and Iva (Samson) DeGarmo. She was welcomed home by big brother Mervin Berdell DeGarmo. Wilma grew up in Haigler and graduated from high school there in 1947. Wilma’s cousins Harold, Ralph and Bonna Cooper lived a number of years with her family in her younger years. Wilma’s first job as a young girl was helping the Olive and Lou Stasser families of Haigler. She would watch their kids and helped cook meals. Her hours were especially long during summer harvest. This proved to be great training for her future with Johnny. Wilma learned how to play piano at a young age. She played the accordion and sang in numerous duets for various church services over the years. From a young age, attending church was a vital part of Wilma’s life. This is where she accepted Christ as her Lord and Savior. She continued playing the piano for the Imperial Manor until last December when she fell and hurt her arm. She met John Melvin Ferguson, while playing piano for a church gathering southwest of Haigler. Wilma had planned on attending business school in Denver but instead, she and Johnny were married August 20, 1948 at the Pilgrim Holiness Church in Haigler. They made their home 13 miles north of Parks, Nebraska, before retiring to Imperial, Nebraska in 2012 where they resided at Parkview Heights. Wilma took great joy in helping Johnny on the farm. It was not uncommon to see Wilma driving tractor, corn and inslage trucks. Wilma was vital in helping Johnny move irrigation pipe by hand. Wilma and Johnny were proud to be one of the first to have irrigation in Dundy County. Johnny and Wilma started the 48 Angus Ranch and had their own sale every year. Wilma provided the food for everyone who attended the sale. She loved to cook and serve full meals to anyone who might happen to visit her home during meal time. No one went away hungry. On October 24, 1949, Wilma and Johnny welcomed home Mervin Wayne. Wilma Jean followed on April 23, 1952, and Mark John joined them on October 29, 1968. Each of the kids were put to work on the farm as soon as they were old enough to steer a car or truck. Wilma was also a “school bus driver” for some of the students at District #37 school (Lutz School). She would pick up anyone along the four mile route she took while transporting Wayne and Jean to school. Johnny and Wilma had two favorite things occur each summer. The first was attending Imperial Valley Holiness Camp and the second was being a part of the Nebraska annual Angus tours. Some of the other things that Wilma loved to do included having a large garden. She would can the fruits of her labor to share with family and friends. She was an excellent seamstress and sewed many different garments for her family. Her passion in later years was arranging silk flowers. After moving to the Imperial Heights Wilma loved playing bingo, dominoes and corn hole. She loved visiting and reminiscing about old times with her cousins, other family members and friends. Wilma left this earth to be greeted by her Heavenly Father on December 29, 2018. She was preceded in death by her parents Glen and Iva, infant brother Virgil, infant sister Cleo, grandson Nathan Ferguson and husband Johnny. She is survived by son Wayne and wife Marlyn of Parks, daughter Jean and husband Robert Beck of Nixa, Missouri, and son Mark and wife Julie of Imperial. Grandchildren Carla and Josh Taylor of Imperial, Derek and Carla Beck of North Platte, Matthew and Kelly Beck of Stillwater Oklahoma, Emma Ferguson and Tristan Ferguson of Imperial. She is also survived by five great-grandchildren and several nieces, nephews and cousins. Funeral services will be held Wednesday afternoon, January 2nd, 2019, 2:00 P.M. (CENTRAL TIME) / 1:00 P.M. (MOUNTAIN TIME) at the Southwest Nebraska Holiness Church in rural Wauneta with Pastor Lloyd Bley officiating. Interment will follow in the Benkelman Cemetery, Benkelman, Nebraska. The casket will be open for viewing prior to services; the same day as service, at the church. A memorial has been established to the Southwest Nebraska Holiness Church. Online condolences may be left at liewerfuneralhome.com LIEWER FUNERAL HOME IS ENTRUSTED WITH ARRANGEMENTS

The family of Wilma W. Ferguson created this Life Tributes page to make it easy to share your memories.