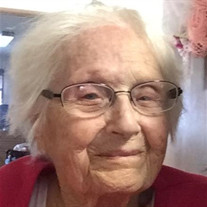 Wilda Mae (Little) Alsbury was born to Frank Benjamin and Gladys Marie (Williamson) Little on June 22, 1919 on the family farm north of Benkelman. She died February 16, 2016 at the Dundy County Hospital at the age of 96 years, 7 months, and 25 days. Wilda attended country school through the 8th grade and subsequently graduated from Benkelman High School in 1939. She married Kenneth Everett Alsbury on September 7, 1939 at the Presbyterian Church parsonage in Benkelman. To this union was born a daughter, Diana Marie, on July 30, 1946. She blessed their lives for only a short period of time and was called to her heavenly home on February 26, 1950. Kenneth and Wilda spent most of their life on the farm, where they worked long, hard hours, side-by-side, as a “team”. They took a break from farming for a short period and moved to Denver, where Wilda attended Cosmetology School. But, they both loved farming, and that life-style in southwest Nebraska called them back. At that time, they purchased a farm in Chase County. They resided there until Kenneth’s health forced their retirement and they moved to Imperial. As residents of Imperial they passed many hours fishing at Enders Lake and Wilda worked part-time at a craft store. After her husband’s death, October 7, 1985, Wilda moved to Benkelman. She will be remembered by all who knew her for her work with crafts. She loved crafts of all kinds -- crochet, knitting, bead work and quilting (to name just a few). In fact, because she was so skilled, many people sought out her expertise. It is not surprising then, that her services were recruited by the Scrapbook Heaven -- where she derived great pleasure associating with fellow crafters. She also had a special joy working outdoors with her flowers and garden. Failing health required her to move to the Hester Home in September, 2015. Both she and Kenneth were members of the Imperial Church of Christ. Following her move to Benkelman, Wilda attended the Stratton Church of Christ. She is preceded in death by her parents - Frank and Gladys Little, her husband - Kenneth, one daughter - Diana Marie, two brothers - Francis and Charlie and two sisters - Mabel Hansen and Leta Henderson. In addition, one brother and one sister were deceased at/or immediately following birth. She is survived by one sister - Deloris Conley, adopted daughter - Jean Ray and husband, four grandchildren, many nephews, nieces, other relatives and a host of friends. Services were held Saturday February 20 at the Benkelman Community Center with Norman Morrow officiating. Interment was in the Benkelman Cemetery. A Memorial was established to the Benkelman Senior Center. Online condolences can be left at liewerfuneralhome.com BENKELMAN MEMORIAL CHAPEL WAS ENTRUSTED WITH ARRANGEMENTS

Wilda Mae (Little) Alsbury was born to Frank Benjamin and Gladys Marie (Williamson) Little on June 22, 1919 on the family farm north of Benkelman. She died February 16, 2016 at the Dundy County Hospital at the age of 96 years, 7 months, and... View Obituary & Service Information

The family of Wilda Mae Alsbury created this Life Tributes page to make it easy to share your memories.