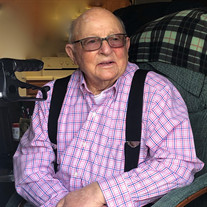 Wilber L Kuenning of Imperial, NE passed away on October 9, 2020 from Coronavirus. He was born February 18, 1922 in Unadilla, NE to Oscar & Myrtle Kuenning. The fifth of 12 children, he was raised by a single mother. He started working for... View Obituary & Service Information

The family of Wilber Kuenning created this Life Tributes page to make it easy to share your memories.