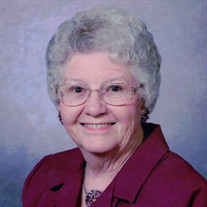 Vivian Todd Vivian was born October 6, 1930, in rural Hayes County 18 miles north of Wauneta, Ne to William Eugene and Marie Bernadine (Kerchal) Priest. She was the third of six children. Vivian passed away peacefully May 7, 2022, at the Chase County Hospital with her children, great and grandchildren by her side. She was 91 years of age. Vivian’s early childhood was spent at Wallace, Ne where she began Grade School. In January 1944, during WWII the family moved to Hamlet, Ne, completing her Elementary Education. Vivian graduated from Wauneta High School with the class of 1948. After graduation, Vivian moved to Imperial and worked as a waitress at the Imperial Bakery and Café where she met Bud Todd and was married October 7, 1950, at St. Patrick Catholic Church in McCook, Nebraska. To this union were born one son and three daughters. They raised their children at 142 Wellington and established the Todd Trailer Court. Vivian was co-owner and managed the day-to-day operations for 36 years. In addition, she worked at the Imperial Auction Café as a cashier for 42 years, retiring at the age of 81. After the children were grown, Bud and Vivian followed their dreams to travel. They were able to attend Bud’s Army reunions every two years and made trips to Hawaii, Europe, and The Holy Land. In April, 1993, they sold their business and home, moving to her present residence at 642 Douglas. Faith and family were Vivian’s priority in life, with each of her children and subsequent great and grandchildren lighting her life in their own special way. She made picture and scrapbooks for each of her 8 grandchildren. She loved fishing, playing Pitch and Pinochle cards, attending Husker football games, and bowling. Vivian was especially proud of winning a gold medal at the Cornhusker state games in 1993. She devoted her life to creating positive memories for everyone in her community and excelled. Vivian belonged to St Patrick Catholic Church and Alter Society, Eagles Auxiliary 3472, the Imperial Extension (F.C.E) and was a life member of the local VFW Auxiliary 4688. Vivian was instrumental in organizing the Avenue of the Flags at Mount Hope Cemetery and put the flags up each Memorial Day for many years. She delivered Meals on Wheels for the Senior Community Center for 25 years, until Covid precautions. In addition she worked with the Blood Mobile for 5 years; donating 5 gallons of blood throughout her life. She was proceeded in death by her parents, husband Bud, sisters Clara Farmer and Della Buczek, and brothers Frank, Don, and LaVern Priest, and one grandchild. She is survived by her four children: son Duane and wife Lolita of Imperial granddaughter Jessica Brown (Shane) and Krystal Davis (J. D.) of Lincoln, NE., daughter Doris Zupfer and husband Steven, of Carver, MN, granddaughter Kelley Darr (David) of Jordan, MN. Daughter Carolyn and husband Bill Wright of Grant, NE; grandson Randy (Heather) of Winsor, CO, Sherry Wright of Hickman, NE; Laura Parde (Jeff) Adams, NE.; her daughter Trudy Lund and husband Dan of Chaska, MN; sons Tyler Lund, of Chaska, MN and Dylan (Arica) of Winsted, MN.; and 14 great-grandchildren. Sisters-in-law Jean Todd of Centennial, CO, Marilyn Walker of Ogallala, NE, and Karen Priest of Lincoln, NE: Special friend Keith Jaeger of Imperial, NE, numerous nieces and nephews and a host of other relatives, friends, neighbors all of whom loved her and will miss her dearly. Mass of the Christian Burial will be held Friday morning, May 13, 2022, 10:30 A.M. at St Patrick Catholic Church of Imperial, with Father Lothar Gilde celebrant. Interment will follow at Mount Hope Cemetery, Imperial. Visitation will be held Thursday afternoon, May 12, 2022, 2:00 P.M. -6:00 P.M at Liewer Funeral Home, Imperial. A Rosary will be recited Thursday evening, May 12, 2022, 7:00 P.M. at St. Patrick Catholic Church of Imperial. A memorial, in Vivian’s memory, has been suggested to the Todd Family for a future designation. Online condolences may be left a liewerfuneralhome.com LIEWER FUNERAL HOME ENTRUSTED WITH ARRANGEMENTS

Vivian Todd Vivian was born October 6, 1930, in rural Hayes County 18 miles north of Wauneta, Ne to William Eugene and Marie Bernadine (Kerchal) Priest. She was the third of six children. Vivian passed away peacefully May 7, 2022, at the Chase... View Obituary & Service Information

The family of Vivian B Todd created this Life Tributes page to make it easy to share your memories.