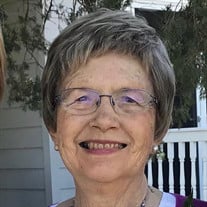 Vivian Bubak Vivian Jean Bubak was born on April 10, 1940, at Stromsburg, Nebraska, to James L. and Doris B. (Larson) Anderson. As a young lady, Vivian grew up and attended school in Stromsburg, graduating from Stromsburg High School in 1958. She went on to attend Kearny State College and obtained her teaching certificate. After graduation from college, she moved to Cozad, Nebraska, where she was an elementary school teacher. Vivian was united in marriage to Jerry Dean Bubak on December 27, 1961, in Stromsburg, Nebraska. To this union three sons where born, Chris David, Jeffrey Dean and Jay Dee. They resided in Cozad, Nebraska, for several years before moving to Champion, Nebraska, in 1966. Vivian moved to Imperial, Nebraska, after Jerry’s death in 2015, where she has resided until present. Vivian was a homemaker, tirelessly working to care for her husband and three boys. He also was an integral part of their farming/ranching operation, doing all the bookkeeping as well as driving grain cart, weighing trucks, and whatever else was needed. She enjoyed quilting, cooking, sewing, and craftwork. She was a member of the Imperial Bible Church and loved being a part of a community bible study group. She was a member of an extension club and a quilter’s guild. Vivian especially loved to follow her boys and the grandkids in their many athletic and school activities. Vivian passed away Sunday evening, December 23, 2018, at the University of Nebraska Medical Center in Omaha. Vivian was 78 years of age. Survivors Include: Sons: Chris and wife, Natalie, of Lincoln, NE Jeff and Wife, Kim, of Imperial, NE Jay and wife, Christel, of Almaty, Kazakhstan 13 Grandchildren: Michaela, Jared, Sarah, Justin, Kaycee (Husband: Tanner McCoy), Caleb, Ashley, Austin, Abigail, AnneDee, Alex, Alynn, and Adella Brothers: James Anderson and wife, Deloris, of Stromsburg, NE Doug Anderson and wife, Cheryl, of Stromsburg, NE Brothers-In-Law: Dale Bubak and wife, Bonnie, of Tekamah, NE Bob Bubak and wife, Linda, of Cozad, NE Aunt: Donna Bergman, of Holdrege, NE She was preceded in death by her parents, husband, Jerry, and parents-in-law: Jerry and Dorothy Bubak Funeral Services will be held Monday Morning, December 31, 2018, 10:30 A.M. (MT) at the Imperial Bible Church of Imperial, with Pastor Robbie Clay officiating. Interment will follow at Mount Hope Cemetery, Imperial. Visitation will be held Sunday afternoon, December 30, 2018, 2:00 P.M. – 6:00 P.M. (MT) at the funeral home in Imperial. A memorial has been established to Imperial, Bible Church, Imperial, Nebraska Online condolences may be left at liewerfuneralhome.com LIEWER FUNERAL HOME OF IMPERIAL ENTRUSTED WITH ARRANGEMENTS

Vivian Bubak Vivian Jean Bubak was born on April 10, 1940, at Stromsburg, Nebraska, to James L. and Doris B. (Larson) Anderson. As a young lady, Vivian grew up and attended school in Stromsburg, graduating from Stromsburg High School in 1958.... View Obituary & Service Information

The family of Vivian J. Bubak created this Life Tributes page to make it easy to share your memories.