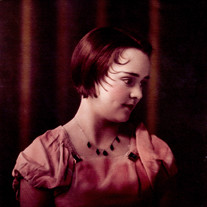 Virginia Goddard of Imperial, Neb., went to meet her Lord Aug. 4, 2017 after having resided at the Imperial Manor in Imperial. A memorial service for Virginia will be held on Saturday, Sept. 9, 2017 at 10 a.m. at Liewer Funeral Home in Imperial with Reverend Martin Harmon officiating. Burial was held earlier at Mount Hope Cemetery, also in Imperial. Virginia was born Aug. 18, 1919 in Cambridge to Coulter and Hazel Dauchy. She grew up thirty miles northeast of McCook on a farm owned by her parents. At the age of fourteen, she entered high school at the Nebraska School of Agriculture, an extension of the University of Nebraska, in Curtis and graduated from that institution four years later. She received a degree from the Red Cross Home Nursing Program in Chase County in June, 1942. She was baptized into the Reorganized Church of Jesus Christ of Latter Day Saints on October 11, 1942. She married Roland “Roly” Goddard at her parents home in Freedom on Feb. 16, 1938. To this union four children were born: Jacky, Don, Connie and Robert. She and Roly raised their children on a farm near Champion. She was a loving farmer’s wife, mother and homemaker. Later the family moved to Scottsbluff where she worked in a drug store and later in a jewelry store. She also attended evening classes for typing and bookkeeping at Scottsbluff Public Schools. Later, Roly worked for Farmers Irrigation at the head gates on the North Platte River near Henry. While he worked for Farmers Irrigation, Virginia was a loving and caring helpmate with Roly as he served as pastor of the RLDS Church in Torrington, Wyo., for 16 years. When Roly retired in 1986 they moved to Independence, Mo., where they resided until Roly became ill. She enjoyed gardening, growing flowers and fishing. She liked to crochet afghans and do needlepoint. She loved horses and was an excellent rider having ridden her pony to grade school for eight years. She was a member of Extension Clubs and was an avid Husker fan. She was a generous, gentle and kind-hearted person towards both family and friends. She will be greatly missed. She is survived by her son Don (Sherry) of East Helena, Mont.; daughter Connie (Donal) Dike of Mitchell; son Robert of Bella Vista, Ariz.; six grandchildren; 15 great-grandchildren and three great-great grandchildren as well as several nieces and nephews. Virginia was preceded in death by her parents, Coulter and Hazel; her brother Marvin; one son Jacky; grandsons Todd and Anthony and nieces Sonia and Cheryl. A memorial has been established in Virginia’s memory. No visitation, Virginia chose cremation. Online condolences may be left at liewerfuneralhome.com. LIEWER FUNERAL HOME ENTRUSTED WITH ARRANGEMENTS

Virginia Goddard of Imperial, Neb., went to meet her Lord Aug. 4, 2017 after having resided at the Imperial Manor in Imperial. A memorial service for Virginia will be held on Saturday, Sept. 9, 2017 at 10 a.m. at Liewer Funeral Home in Imperial... View Obituary & Service Information

The family of Virginia C. Goddard created this Life Tributes page to make it easy to share your memories.