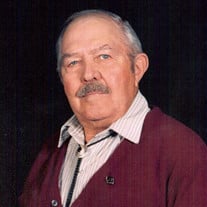 Vincent L. Marvin was born December 16, 1921 west of Imperial, Nebraska in the home of his parents, Loyd Edward and Clara Verneal (Casebeer) Martin. Vincent had two younger brothers, Keith and Bernard. Vincent graduated at age 16 from Chase County High School in 1938. Upon entering the United States Armed Forces, he was given the opportunity to attend Cornell University in New York State and became a tech sergeant in the Signal Corps., stationed in the European Theatre. Throughout his life, the church was always very important and a necessary part of Vincent’s years. He accepted Jesus as his Lord and Savior at an early age and was baptized in the Christian Church of Lamar, Nebraska. He was a longtime leader in the Church, serving as Elder and Deacon and was still serving the Lord by teaching his Sunday school class the Sunday prior to his passing. Starting as a young boy, Vincent helped in the family farm with milking Shorthorns and farming. Agriculture continued to be a major part of his life after service to his country in WWII. Vincent fell in love and married Thyra Mae Hill on September 21, 1947. They were blessed with the birth of two daughters, Cynthia Ann and later Sylvia Sue, and were saddened when Sylvia was lost due to a tragic accident at a young age. They enjoyed many happy years together and were able to celebrate their 50th wedding anniversary on September 21, 1997. Vincent was a dedicated caregiver for Thyra the last years of her life while she was afflicted with chronic arthritis disease. Little did he know that this experience would prepare him to be self-sufficient in his home alone for the last 17 years of his life. Their life together allowed them to live their dream of building a reputable Registered Hereford herd. They enjoyed many lifelong friends from this work. His passion for Hereford Cattle allowed him to be honored many times for his contributions to the beef industry, including Nebraska Hereford Breeder of the year in 1993. Vincent was active in several state and local boards including the District 22 School, Imperial Coop, Nebraska Hereford Association, Nebraska Cattlemen, and a member of the American Hereford Association, VFW Post 4688 in Imperial, Pheasants Forever and NRA. Thrya’s health changes in later years allowed them to explore new interests together, including gardening and antique collecting. It led to working at the local “Junkers” Antique Store. This became a labor of love that continued for many years after Thyra’s passing. This permitted him to connect with many people of similar interests and become a resource to other collectors. Vincent was a food steward of the land and everything the Lord gave him. He was awarded the Jaycee Young Farmer Award in 1955 and the natural Resources Conservation Award in 1984. Still this summer, he was chopping musk thistle and on two special days, taught his two oldest great-grandchildren the value of caring for the land. A long and healthy life allowed Vincent to live independently on the 125 year old Angelo C. Hill homestead in Chase County just 2.5 miles away from where he was born. Vincent set high standards for himself and expected the same from his family and friends. He was extremely proud of his entire family and expressed it often with “just the right words”. Vincent Marvin passed away peacefully in his home on October 7, 2016. He was 94 years of age. Vincent was preceded in death by his wife, Thyra, daughter, Sylvia, son-in-law, Larry White and brother, Keith. He leaves to morn his passing: his daughter, Cynthia Ann Haynes and husband, Gale of Holyoke, Colorado; granddaughter, Kellie Sue and Husband Chan Melton of Ham Lake, Minnesota; granddaughter, Becky Ann and husband, Brad Claycamp of St. Joseph, Missouri. Four great-grandchildren: Ashlyn Claycamp, Colton Claycamp, Abby Claycamp and Taylor Sue Melton. One Brother, Bernard Marvin and wife Margaret of Imperial, Nebraska and many other relatives and friends. Funeral Services for Vincent Marvin will be 10:00 A.M. (MT), Tuesday morning, October 11, 2016 at the First United Methodist Church in Imperial with Pastor Dirk Weiss and Mr. Kent Swink officiating with interment following at Mount Hope Cemetery in Imperial with full military honors. Visitation will be Monday afternoon, October 10, 2016 from 2:00-6:00 P.M. (MT) at the funeral home in Imperial. Memorials have been established to the Chase County Hospital Cardiac Rehabilitation and Physical Therapy Departments. Online condolences can be left at liewerfuneralhome.com LIEWER FUNERAL HOME IS ENTRUSTED WITH ARRANGEMENTS

The family of Vincent L. Marvin created this Life Tributes page to make it easy to share your memories.