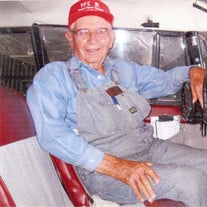 Vilas Ancel Smith Vilas Ancel Smith, son of Millard Bryan and Ethel Ellen (Bressie) Smith, was born January 18, 1922 in rural Chase County where he lived his entire life. Vilas passed away on September 22, 2016 at the Medical Center of the Rockies in Loveland, CO, at the age of 94 years 8 months. Vilas married Elna Rae Kitt on June 15, 1946 making their home on a farm 5 miles north of Enders, NE. To this union, four children were born; Lloyd Allan, Marla Rae, Merle Ann, and Maxine Faye. On December 1, 1967, Vilas married Betty Shield and they made their home on his farm 5 miles northwest of Champion. Vilas served in the U.S Navy during WWII. Vilas was baptized June 7, 2001 at the Zion Lutheran Church in Imperial, NE., and a member until present. Vilas' passion for flying began at an early age. He learned to fly at the age of 16, which he continued to do for the next 75+ years. He enjoyed flying various types of aircraft throughout his life including building and flying his own KitFox experimental plane. He began his own crop dusting business, Champion Ag. Service, in 1982. Vilas continued to fly until the age of 92. Vilas loved to build model airplanes and established his Hobby Shop to supply his many flying friends. He sold over 100 RC training planes that he used to teach others to fly. He hosted an Annual RC Fly-In for many years, with pilots landing on his airstrip and others flying their RC Models. His hobby shop and other buildings are filled with his models and models of his friends. Music was another passion and brought hours of enjoyment throughout his life. Vilas played the button-box accordion, the banjo, and mandolin. He was self-taught and played entirely by "EAR." In his early years, Vilas played with the Guy Hixon Band for many area dances and events. Many hours were spent playing music with his daughter Marla Rae and he especially loved Polka music. Farming was his life's work. Vilas built many of the earthen dams and terraces in Chase County. From farming with horses to modern machinery with GPS technology, Vilas did it all. He was happiest when he was working. He was especially proud of the 4 generations farming together at the time of his death. He was preceded in death by his parents, younger brother Calvin, grand- daughter Veneta Smith, and niece Trudy Gorsuch. Survivors include wife Betty Smith of Champion, Lloyd (Rhonda) Smith of Champion, Marla Rae Smith of Imperial, Merle Ann (Larry) Konken of Hershey, NE, and Maxine Smith of Cheyenne, WY. Step-children are Tom (Judy) Shield of Kearney, NE and Beverly (Pete) Snyder of Imperial, 10 grandchildren, 26 great grand children, sister Bonnie Shultz and nephew Calvin Grantham. Funeral services will be held at 10:30 a.m. Monday, September 26th at the Zion Lutheran Church in Imperial, Nebraska with Pastor David Kahle officiating. Burial at Mount Hope Cemetery in Imperial. Pallbearers are Dirk Bauerle, Jason Cogil, Harlow Hill, Ron Koberstein, Carl Levy, and Kenny Owens. Honorary pallbearers are the 10 grandchildren, 26 great grand children, and a multitude of flying friends. A memorial has been established in memory of Vilas. Liewer Funeral Home is in charge of arrangements.

Vilas Ancel Smith Vilas Ancel Smith, son of Millard Bryan and Ethel Ellen (Bressie) Smith, was born January 18, 1922 in rural Chase County where he lived his entire life. Vilas passed away on September 22, 2016 at the Medical Center of the... View Obituary & Service Information

The family of Vilas A. Smith created this Life Tributes page to make it easy to share your memories.