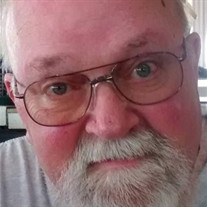 Vernon Wayne Whetstone, age 69, was born July 24, 1947, in Joplin, Missouri to Kenneth Rex and Mary Ella (Putnam) Whetstone. He grew up in and was educated by the Joplin School System, graduating from Joplin High School with the class of 1965, the greatest ever. He attended Missouri Southern College, Joplin, Missouri, for two years transferring to Missouri Valley College, in Marshall, Missouri, where he graduated with a Bachelor of Arts in Human Relations in 1970. While at Valley he met and married the love of his life, Janice Whisnant, on June 26, 1971, at Marshall, Missouri. To this union three children were born, Kimberly Elizabeth, Stephanie Danielle, and Kenneth David. Of all the occupations and positions of responsibilities, he held throughout his life—and there were many—the one that he felt honored by the most was God’s call to “preach My word from My pulpit.” While he never received formal education for the ministry, he always said when asked about his theological education that he spent two years at “Bedside Bible College”; two years at “Paul’s Arabian School of Theology” and the rest of the time working on his “Backside of the Desert Degree” with Moses. To fulfill this call he spent three years in a ministry of pulpit supply in southwest Missouri before being called to the pulpit of Trinity Baptist Church, in Benkelman, Nebraska, where he spent four years. After leaving Trinity, he spent the next 34 years engaged in a pulpit supply ministry in southwest Nebraska, Kansas, Colorado, Missouri, and even Illinois. In 2011, he (and Janice, in 2012) moved to Arvada, Colorado, to start a new challenging and wonderful adventure of babysitting grandchildren, an occupation that he thoroughly enjoyed until the present. He was able to introduce Elliot and Evelyn to the marvels of astronomy and the intricacies of making paper airplanes. Vernon always enjoyed taking Tyrell and Sheldon to the Nebraska Star Parties. Vernon went to be with his Lord, peacefully in his sleep with his wife and children by his side, at Clear Creek Care Center Westminster, Colorado, on March 17, 2017. He was preceded in death by his sister, Carol Joyce Whetstone Peak, and his parents. He is survived by his wife, Janice, of Arvada, Colorado; daughters Kimberly Bartholomew and husband Chuck of Imperial, Nebraska; Stephanie Vinton and husband Matthew of Arvada, Colorado; son Kenneth of Denver, Colorado; brother Larry and wife Jean of Altus, Oklahoma; and four grandchildren, Tyrell Bartholomew of Imperial, Nebraska, Sheldon Bartholomew of Maryville, Missouri, Evelyn Vinton of Arvada, Colorado, and Elliot Vinton of Arvada, Colorado, aunts, uncles, cousins, nieces, nephews, and a host of friends and Hairy William Winston Charles Randolph Bubba the 1st (his beloved dog). Funeral services were held at Arvada Baptist Church, Arvada, Colorado on Saturday, March 25, and Monday morning, March 27th, 2017, 11:00 A.M. at the Trinity Baptist Church of Benkelman, NE., with Pastor Jon Acker officiating. Interment will follow at the Benkelman Cemetery, Benkelman. Visitation will be held before services on Monday, March 27th, 2017, starting at 10:00 A.M. at the Trinity Baptist Church, Benkelman, NE Cards may reach the family by sending them in Care of the Arvada Baptist Church, 8350 Pomona Drive, Arvada, Co. 80005 On line condolences can be left at liewerfuneralhome.com BENKELMAN MEMORIAL CHAPEL ENTRUSTED WITH ARRANGEMENTS

Vernon Wayne Whetstone, age 69, was born July 24, 1947, in Joplin, Missouri to Kenneth Rex and Mary Ella (Putnam) Whetstone. He grew up in and was educated by the Joplin School System, graduating from Joplin High School with the class of 1965,... View Obituary & Service Information

The family of Vernon W. Whetstone created this Life Tributes page to make it easy to share your memories.