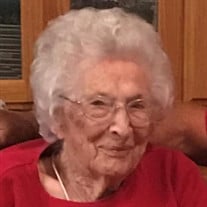 Vera L. Whipps was born in Anoka, NE on October 17, 1922, and passed from this life on September 10, 2020, at her home in Florence, AZ surrounded by her family. She was a devoted Christian, and a loving wife, mother and grandmother. She is survived by her four children, Carole Marshall of San Tan Valley, AZ and Stapleton, NE, Larry (Carol) Whipps of San Tan Valley, AZ and Buna, TX, Lyndell (Doris) Whipps of Florence, AZ and Max, NE and Karen Raymer of Sioux City, IA, 11 grandchildren, Marcia Higgins, Bart (Laura) Whipps, Tana (Bryan) Welch, Frank (Courtney) Whipps, Lori Reid, Lyndell (Lisa) Whipps, Levi Whipps, Teresa Urrego, Tracy (Greg) Dittmer, John Raymer and Jared (Cayla) Raymer and a host of precious great grandchildren, great-great grandchildren, relatives and friends. She was preceded in death by her husband, Frank, parents, Vaughn and Eva Ticknor, grandson Craig Marshall, son-in-law, Eldon Marshall, sisters; Lewellen Deming, Lucille Harrison and brother, Lloyd Ticknor. Vera and Frank were married 1/1/1940 in McCook, NE and then started farming south of Grant, NE. In 1945 they moved to the ranch east of Max where they raised their children. In 1966 they moved to Bedford, IA where they had a farm and Western store selling saddles, tack, boots, trailers and western wear. They moved back to Max in 1986. Vera was known for her pie baking expertise – her apple and bumbleberry pies were the best, bar none. Her family always came first – she served on the District 27 school board at Max in the early 1950’s because of a sense of responsibility. She mentioned “my children were in school, and I needed to know what was going on!” She won the McCook Gazette Mother of the Year contest in 1998. She was also a dedicated member of Ola Chapter, #317, Order of the Eastern Star, and served as Worthy Matron in 1959, and in the Grand Chapter as an Assistant Grand Warder that same year. After many years of diligent work in the farming and livestock industry, Frank and Vera retired to spend winters in Mission, Texas, then after Frank’s passing she moved to Arizona. In lieu of flowers, memorials may be directed to one of her favorite charities: Max United Methodist Church, Dundy County Hospital, Benkelman or Stratton Ambulance and/or fire department or Hospice of the Valley, AZ. Funeral services will be held Saturday Morning October 3, 2020, 10:30 A.M. (CT) at the United Methodist Church of Stratton, Nebraska with Pastor Rod Heilbrun and Rev. Lana Fong officiating. Interment will follow at the Rose Hill Cemetery, Stratton, with Mr. Lyndell Whipps Jr. officiating. Visitation will be held Friday, October 2, 2020, 4:00 -6:00 P.M.(MT) with the family present at the Benkelman Memorial Chapel, Benkelman, NE On line condolences maybe left at Liewer Funeral Home.com BENKELMAN MEMORIAL CHAPEL IS ENTRUSTED WITH ARRANGEMENTS

Vera L. Whipps was born in Anoka, NE on October 17, 1922, and passed from this life on September 10, 2020, at her home in Florence, AZ surrounded by her family. She was a devoted Christian, and a loving wife, mother and grandmother. She is... View Obituary & Service Information

The family of Vera L. Whipps created this Life Tributes page to make it easy to share your memories.