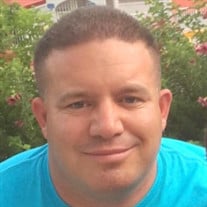 Tyler Carl Schneider was born on February 17, 1977 in McCook, Nebraska to the late Carl Fred Schneider and Darlla D. Krutsinger. Tyler was the first of three sons, followed by brothers Toby Lee and Jesse Dean. Tyler grew up in Benkelman, Nebraska where he attended Benkelman Elementary and graduated from Dundy County Highschool in 1995. Tyler accepted Jesus Christ as his personal Lord and Savior at the age of 9 and was baptized at Trinity Baptist Church in his hometown. As a child, Tyler enjoyed playing sports, collecting baseball and football cards and developed a passion for fishing at Jones’ pond. Like many Nebraska boys, Tyler became a true Husker fan which encouraged him to obtain many trophies in the local Punt Pass and Kick competitions, even advancing to the state level a few times. Upon completion of high school, Tyler went on to further his education in Goodland, Kansas seeking an associates degree in Telecommunications and graduated from Northwest Kansas Technical College in 1997. Fresh out of college with his degree, Tyler landed a position with National Network Services in Denver, Colorado and thus began his lifelong career in his field of choice. June 16, 2001, Tyler married Megan Lutz and they purchased their first home in Thornton, Colorado. To this union, one daughter, Alexa Grace, was born on December 5th, 2004. Throughout his professional career, Tyler received several promotions as he climbed the ladder in the telecommunications field working for Level 3/Century Link to the title of Senior Technician. Tyler recently earned an opportunity to become an Optical Engineer with Astreya, a career advancement he was very excited about. Tyler was known for his admirable work ethic and dependability by his co-workers, employers as well as family and friends. When he wasn’t working, Tyler enjoyed attending and watching Big Red Football games, as well as the Colorado Rockies and the Denver Broncos. Tyler’s favorite hobbies included traveling, spending quality time with his daughter Alexa and his family & friends, fishing, pheasant and goose hunting and this was one of his favorite ways to spend quality time with his friends and family. As a child who grew up in the 80’s, Tyler’s love and taste in quality music was something people from every generation could appreciate and share with him and he always knew just the right tune to play that would strike a note in our hearts. As a son, a brother, father and uncle, Tyler in all things, was as BIG in his heart as he was in his build. He will be remembered for his captivating laugh and his mile wide smile. Tyler was preceded in death by grandparents Louis and Doris Krutsinger, Glen and Dottie Schneider, father Carl Fred Schneider, uncles Lannie Krutsinger, Glen (Buster) and Jerry Schneider. He is survived by his mother Darlla Kerchal and husband Rod of Benkelman, NE; Daughter Alexa Grace Schneider of Omaha, NE; brothers Toby (Elizabeth) Schneider (Alyvia, Addison and Grayson) of Omaha, NE; Jesse (Jodi) Schneider (Bobby and Alyssa) of Benkelman, NE; Craig (Connie) Kerchal (Colton, Noah and Jackson) of Benkelman, NE; Sisters Traci (Andrew) Serna (Jeremy, Aaron, Derrick and Kendra) of Brighton, CO; Marti (Ed) Olsen, (Taylor, Erik, Eddie & Christian) of Littleton, CO; Cheri (Kerby) Ham (Katie, Kylie and Koby) of Omaha, NE and many beloved uncles, aunts and cousins to Tyler. Funeral Services will be held Monday morning, December 28, 2020, 11:00 A.M (MT) at the Benkelman Memorial Chapel, Benkelman, NE, with Pastor Michael Clements officiating. Inurnment will follow at the Benkelman Cemetery at a later date. Memorials have been suggested to the Schneider Family for a future designation.

The family of Tyler C Schneider created this Life Tributes page to make it easy to share your memories.