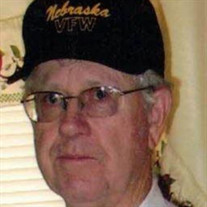 To everything there is a season, and a time for every purpose under heaven; a time to be born, and a time to die; a time to plant, and a time to pluck up that which is planted, Tom understood the seasons. Thomas Dean Russell was born on June 2, 1937. Tom, the son of Florence Helen (Holtz) and Howard Kenneth Russell, was born at the family farm in rural Hamilton County near Marquette, Nebraska. Tom and his seven siblings attended the rural district 69 school, until that building was moved to the Russell farmstead. The Russell children then attended the Marquette 1 R first consolidated school and high school in Marquette. Tom enjoyed working with his family on the farm and also worked for the local ASCS office at the grain bin site. Tom honorably served in the US Army from 1960 – 1962 and in the reserves until December 5, 1966. Tom farmed near Phillips Nebraska from 1964 – 1967 before moving his family to rural western Chase County near Lamar, Nebraska. Tom farmed with his brother Bob for a time and also in partnership with his sister Rosalie. Like his father Howard, Tom sold seed corn for Garst and Thomas, then Pioneer before retiring as a Garst seed salesman. During his early years farming in Chase County he also worked at Prior Implement with his good friends Rudy and Doug Brandt. Tom’s cattle operation and farming kept him busy and as his seed business grew, he ended the cattle operation which allowed him time to travel. Tom and his family enjoyed traveling, with numerous trips to South Dakota, Padre Island, Texas, Minnesota, Tennessee, Florida and California. Tom was very proud of the fact that he had visited all 50 states during his life. Tom’s seed business provided him the opportunity to travel and he hosted his parents and sister, daughters, and niece on trips to Mexico, the Caribbean, Europe, Hawaii, just to name a few. Tom really enjoyed his annual deep-sea fishing trip to Loreto, Mexico, with some local friends from the Holyoke community, enjoying yellow tail and tuna fish, watching the dolphins, stingrays and grey whales. Tom was joined by his brother Melvyn one year, and they enjoyed the trip together, with great stories to share. Tom enjoyed farming, helping neighbors and being a part of the community. His hobbies included golf, leather tooling and hunting. Tom farmed for years with his daughters, as he had given up on hiring a “hired man” as they frequently disappeared to take naps in the shade. Tom was never a man of many words; he expressed his love through his actions and could be found at music performances, ball games, track meets, 4-H and FFA supporting his daughters and grandchildren at their activities. Tom married Sharon W. Lackey in Sterling Colorado, on April 28, 2000, and the couple settled on the farm near Lamar, Nebraska. Following Tom’s retirement from farming, he and Sharon made Imperial, Nebraska, their home. They enjoyed various trips across the country frequently RVing from state to state visiting family and friends. Tom was a member of Zion Lutheran Church, the American Legion and the Veterans of Foreign Wars. Tom passed away on Tuesday, June 1, 2021 at the Country House Care Center in Kearney, Nebraska. He was 83 years of age. Tom is survived by his wife Sharon of Imperial, NE; daughter Kae Russell, granddaughter Jasmine Russell and great-granddaughter Kinley Russell-Lutt of Aurora NE; daughter Kristi (Steve) McClung, granddaughters Kailin and Stephanie McClung of Big Springs, NE; daughter Kerilyn (Bill) Mersch, granddaughters Kelsey, Kylie and Kiersten Mersch of Aurora, NE; Step-Son Steve (Regina) Lackey, grandson Steven Lackey, granddaughter Samantha Lackey of Manteca, CA; Step-Daughter Chrissy Lackey-Hansen of McCook, NE, grandsons Robert Engel of Grant, NE and Ryan Cockerill of McCook, NE, great-granddaughter Raelynn Engel of Grant, NE. Tom’s siblings include Beverly (Richard) Gustafson of Aurora, NE; Melvyn (Sylvia) Russell of Gretna, NE; Sandra (Wendell) Mankin of Aurora, NE; Karen McClure of Palmer, NE; Nancy (Larry) McDonald of Aurora, NE, sister-in-law Darlene Russell of Grand Island, NE as well as many nieces and nephews. He was preceded in death by his parents, brother Robert Russell, sister Rosalie Russell, brother-in-law Dave McClure and by his daughter’s mother Shirley Russell. Funeral Services will be held Monday, June 14, 2021, 10:30 A.M. (MT) at the Zion Lutheran Church of Imperial, NE. with Pastor David Kahle officiating, Interment will follow at Mount Hope Cemetery (With Full Military Honors), Imperial. Visitation will be held Sunday afternoon, June 13, 2021, 2:00 P.M. – 6:00 P.M. (MT) at Liewer Funeral Home of Imperial, Nebraska. A memorial, in Tom’s memory, has been suggested to the Imperial Ministerial Association, Imperial, Nebraska. Online condolences maybe left at Liewer Funeral Home.com LIEWER FUNERAL HOME ENTRUSTED WITH ARRANGEMENTS

The family of Thomas D Russell created this Life Tributes page to make it easy to share your memories.

To everything there is a season, and a time for every purpose...