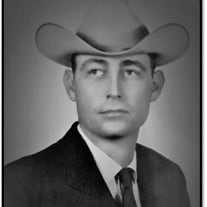 Thomas Andrew Maddux was born December 30, 1928 to Wilfred and Vera Maddux. He died at North Platte, Nebraska on January 13, 2022. Tom was a third-generation rancher. He was raised on the Maddux-Brothers Ranch and Feed yard north of Wauneta, Nebraska. In 1947, Tom married Helen Joye Huston. Tom and Helen had four children, Thomas C., Kate, Tammy and Karla. Tom loved to work cattle and train a good horse. It was his father, Wilfred Maddux, who gave Tom his passion to ranch and ride horses. As a teen, Tom looked forward to helping his dad and the Maddux brothers gather cattle from each ranch. He remembers the central location that the cattle were brought to in order to “dip” them in a heated “dipping vat” designed and built by his dad, Wilfred. Much like his dad, Tom embraced the daily tasks of ranching, running a feed yard, and shipping cattle. In the 1960’s, Tom built a camp on the ranch to help kids from challenged backgrounds experience the responsibilities of ranch life and agriculture. He partnered with organizations like Boys Town, among others, to develop a successful youth leadership program. Tom recalled as a teen riding a train from Wauneta, NE to St Joseph MO, that carried the family fat cattle to market. It was those fond memories of cattle trips that encouraged Tom to build his meat plant. In the 1990’s Tom built a USDA approved meat plant in North Platte, NE to sell dry-aged Nebraska beef. He named it “Top Cut” because of his passion for cutting and the products he would sell. In addition to his meat business, Tom partnered with local businesses and ranchers to create the Nebraska Beef for Our Troops Philanthropy. This program provided Nebraska meat products to our Nebraska Troops stationed overseas. Tom was a Recipient of the Nebraska National Guard Patriot Award. Tom credited individuals like Lowell Ferrell and Waldo Haythorn for mentoring him and encouraging his interest in cutting and rodeo. In 2014, Tom was honored with the AQHA 50-Year Cumulative Breeders award. King P-234, Hard Twist, and Doc Bar are the three bloodlines that Tom has always been proud to have in his breeding program. Tom has earned Register of Merit Awards on several good horses he raised and trained. Tom’s passion for horses and ranching lead to his interest in rodeo. Tom’s PRCA Gold Card number reads #137. The events Tom competed in over the years, and won honors were: Team Tying, Team Roping, RCA Calf Roping, RCA Steer Roping, AQHA Reining, AQHA Halter, Racing, and Cutting. Tom had many stories and good memories from his steer tripping years. In the early 60’s Tom was invited to compete to be the face of the famous “Marlboro Man.” In addition to rodeo events in the 1970s and 80’s, Tom turned his attention to driving horses. Tom belonged to the Colorado Driving society. He competed and won titles in tandem and single. Tom’s love of cattle and cutting inspired him to join forces with individuals that were like-minded and wanted a new organization that would promote opportunity for novice cutters. In 1992 the Western Nebraska Cutters Club was born. The success of the club is complimented by the number of members that support it, and continues to cultivate new interest in the sport in Nebraska. Tom was honored to serve in the beginning as the President of the Western NE Cutters Club (WNC). In the late 90’s after moving to the North Platte area, Tom enjoyed mentoring high school rodeo cutters on horses that he bred and trained. Tom’s fondest memories were of spending time with his children, grandchildren, and great-grandchildren on horseback. If you ever had the opportunity to ride along side of Tom in the pasture, you would have found that it was in the saddle where he shared his greatest wisdom. “Horsemen and horsewomen remember, use soft hands, have a forgiving attitude, stay humble, and remember that spurs are for saying `please’”. Tom was proceeded in death by his parents. He is survived by his son, Thomas C. “Sonny” Maddux, Daughters Kate (Brad) Pierson, Tammy (Mike) Peterson, and Karla (Cliff) Leffingwell. He is also survived by many grandchildren and great-grandchildren. Services are pending. A Memorial, in Tom’s Memory, has been suggested to the Wauneta and Palisade United Methodist Churches. On Line condolences may be left at liewerfuneralhome.com LIEWER FUNERAL HOME ENTRUSTED WITH ARRANGEMENTS

Thomas Andrew Maddux was born December 30, 1928 to Wilfred and Vera Maddux. He died at North Platte, Nebraska on January 13, 2022. Tom was a third-generation rancher. He was raised on the Maddux-Brothers Ranch and Feed yard north of Wauneta,... View Obituary & Service Information

The family of Thomas A Maddux created this Life Tributes page to make it easy to share your memories.