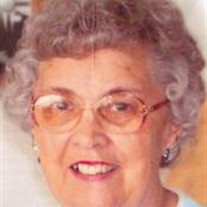 THENA HART Thena Mae Hart was born on May 4th, 1930, in Imperial, Nebraska, to Jacob and Ina A. (Browning) Fuehrer. She graduated from Chase County High School in 1947 and she enjoyed working with her folks on the family farm. Thena Mae worked as a County Clerk at the Chase County Courthouse in Imperial. She was also employed at the appliance store and the Co-op. Thena Mae moved to Loveland in 1963 where she worked at Home State Bank. Later on, she was also a bank teller and a loan officer at Loveland First Industrial Bank and the Big Thompson Credit Union. She retired in 1995. Thena Mae was united in marriage to Harley Hart on June 26, 1964. Thena Mae, our beloved mother, grandmother, great-grandmother, aunt and friend to many, went home to be with her Lord and Savior on Wednesday morning, July 31, 2013, at the Loveland-McKee Medical Center in Loveland, Colorado. She was 83 years of age. Thena Mae’s top priorities were definitely her family and friends. She thoroughly enjoyed entertaining everyone with coffee and her famous brownies, cinnamon rolls, or any special treat. She loved her flower garden, bird-watching, reading Bible scriptures, listening to Christian music, doing crossword puzzles, playing games, collecting cardinals, and was very partial to the family’s 2 huskies, Cheyenne and Sierra. She was also an awesome organist. She was always there to help anyone in need and had a heart of gold. She was always so loving, caring, compassionate and amazing in everything she did. Thena Mae was preceded in death by her parents; husband Harley in 2006; brothers LeRoy and Don Fuehrer; sister Velma Margheim; sisters-in-law Alta and Pauline Fuehrer; and brother-in-law Henry Margheim. Left to carry on Thena Mae’s memories are: Daughter: Stephanie Milton and husband Steve of Johnstown, CO. Son: David Neliton and wife Jeanette of Salem, OR. 3 Grandchildren: Ashley Sund and husband Kirk; Derek Neliton and Garrett Neliton of Salem, OR. I Great-Granddaughter: McKenna Sund of Salem, OR. Nephews: Doug Margheim and wife Gloria of Aurora, CO; Terry Margheim and wife Mary Jane of Dallas, GA; Michael Margheim and wife Jan of Colorado Springs, CO; Dan Fuehrer of Imperial, NE. Nieces: Diana Kline of Lakewood, CO; Joni Parsons and husband John of Loveland, CO; Lori Rowley and husband Jerry of Imperial, NE. Many great and great-great nieces and nephews and many friends. Funeral Services will be held Monday, August 5, 2013, 10:30 A.M. (MT) at the United Methodist Church of Imperial, with Pastor Valera Heydenberk and Melody Newman officiating. Interment followed at Mount Hope Cemetery, Imperial, NE. Visitation was held Sunday, August 4, 2013, 2:00 – 6:00 P.M. (MT) at the Funeral Home in Imperial, NE. A memorial has been established in Thena Mae’s memory to the American Cancer Society, the American Heart Association or to the donor’s choice. Online condolences can be left at liewerfuneralhome.com LIEWER FUNERAL HOME IN CHARGE OF ARRANGEMENTS

THENA HART Thena Mae Hart was born on May 4th, 1930, in Imperial, Nebraska, to Jacob and Ina A. (Browning) Fuehrer. She graduated from Chase County High School in 1947 and she enjoyed working with her folks on the family farm. Thena Mae... View Obituary & Service Information

The family of Thena Mae Hart created this Life Tributes page to make it easy to share your memories.