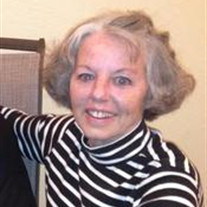 Terry Jo (Holmes) Hofer was born in Bangor, Maine on November 18, 1951 to Maxine (Lynch) Holmes and Dr. Vern D. Holmes. Terry Jo and her parents returned to their native Nebraska, settling in Chadron, where Terry graduated from in 1969. She attended cosmetology school in North Platte and was creative and talented at her craft. She married Lance C. Antonson in January, 1974. Together, Lance and Terry welcomed raised three children, Cortney Jo, Toby Lee, and Levi Evan. Terry taught at Joseph’s College of Beauty while living in Lincoln, NE; she worked construction on a bridge just outside of Haigler, NE – a job her kids were really proud of; and she worked for Burrows Vision Clinic while living in Benkelman, NE. In 1990, Terry married Shawn D. Hofer and was thrilled to help raise his children Joshua and Alison. Terry and Shawn moved to Ogallala-area in 1998. They have thoroughly enjoyed living near the lake for the hunting and fishing as well as in the country because of their love of animals. Terry was an undeniable people person and lit up every room she walked into with her effervescent personality, open heart, lovely smile, and twinkling eyes. Terry is survived by her loving husband of 23 years, Shawn D. Hofer and his children Alison & Leon de Winter and Josh Hofer; her mother Maxine Holmes; her father Dr. Vern Holmes and his wife, Carolie; her siblings, LeAnn Holmes, Tammy and Mike Hollibaugh, Tom & Susan Holmes, and Maya & Jason Orr; her daughter and son-in-law Cortney Jo & Tyson Milanovich; her son and daughter-in-law Toby & Lisa Antonson; and her son Levi Antonson and his fiancé Teri Gardner. Terry Jo is also survived by her four grandchildren who were so adored by and special to her: Mayson & Jonah Milanovich and Broderick & Berkley Jo Antonson. Services will be held for Terry Jo Hofer at the Benkelman Community Center at 10:30am(MT) on Saturday, December 14, 2013. Donations can be made in honor of Terry Jo Hofer at the MADD website www.madd.org or at: MADD - Mothers Against Drunk Driving 511E. John Carpenter Freeway, Suite 700 Irving, TX 75062 BENKELMAN MEMORIAL CHAPEL IN CHARGE OF ARRANGEMENTS

Terry Jo (Holmes) Hofer was born in Bangor, Maine on November 18, 1951 to Maxine (Lynch) Holmes and Dr. Vern D. Holmes. Terry Jo and her parents returned to their native Nebraska, settling in Chadron, where Terry graduated from in 1969. She... View Obituary & Service Information

The family of Terry Jo Hofer created this Life Tributes page to make it easy to share your memories.