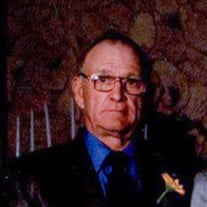 Teddy Dean Anderson Teddy Dean Anderson was born April 4, 1937 in Julesburg, CO to Andy and Verna (Samuelson) Anderson. Ted grew up in Southwest Nebraska, including Lemoyne, Chase and Hayes Counties and a short time in Guffy, CO. Ted graduated from Wauneta High School in 1955. On October 19, 1958, Ted was united in marriage to Caroyln Kay Roschewski at the St Paul’s Lutheran Church south of Wauneta. They spent 53 years together until Carolyn passed away in 2011. To this union three children were born: Cleve, Todd and Frank. They resided in the town of Wauneta until moving east of Wauneta, where they started a hog operation farrowing hogs. Ted completed Auctioneer School and worked for Wallace Construction until he started his career at the Wauneta Cooperative Oil Company in 1958, starting with the propane delivery and moving into management, he then worked at Hayes County Coop until his retirement in May of 2000. Ted’s love for football was not unknown to his family and friends, he loved participating in football in High School. He was no stranger in Southwest Nebraska for attending Friday night games and then traveling east to the Nebraska Husker games on Saturdays. He enjoyed taking family and friends with him, making regular visits to Tom Osborne’s office to visit with Tom. Ted was a past Master at the Wauneta Masonic Lodge and later became a Shriner, and he served on the Wauneta Village Board and Wauneta Falls Bank Board in his younger years. Above all, Ted was a family man, loving to travel to visit the family farm in Hayes County, NE, attending family reunions, children and grandchildren’s events, and loved Christmas with his family. Ted was confirmed into the Redeemer Lutheran Church on October 11, 2015. Ted was preceded in death by his wife, Caroyln, his parent’s Andy and Verna (Samuelson) Anderson, his brother, Harold (Peco) Anderson and sister Diana (Sis) Doetker, brother-in-laws Wayne Roschewski, Walter Jones, nephews Andrew R Anderson and Anthony Roschewski . Ted is survived by his sons, Cleve Anderson and wife, Brenda of Wauneta, Todd Anderson and wife, Cindy of Grand Island, Frank Anderson of Hamlet. Grandchildren, Shane Anderson and wife, Lindsay of Wauneta, Shelby Anderson and wife, Katie of McCook, Tiffany Oschner and husband, Robert of St Francis, KS, Symphony Montey and husband, Derek of Hastings, and Noah Anderson of Grand Island. Great Grand Children, Kiley Anderson, Leighton Anderson, Parker Anderson, Tenlee Anderson, Dominic Montey, Madison Oschner, Destiny Montey and Brooklyn Oschner. Sister in laws Doretta Anderson, Elaine Jones, Elaine Roschewski, brother in laws Gary Doetker, Danny Roschewski, plus many aunts, uncles, nieces, nephews, and cousins. Ted Anderson passed away on September 11, 2017 at the Chase County Hospital in Imperial, NE. Funeral Services will be on Friday, September 15, 2017 at the Redeemer Lutheran Church in Wauneta, NE at 10:00 MST with interment following at the Riverside Cemetery in Wauneta. A memorial has been established in Ted’s memory. Online condolences may be left at liewerfuneralhome.com Liewer Funeral Home is entrusted with arrangements.

The family of Ted D Anderson created this Life Tributes page to make it easy to share your memories.