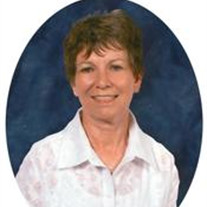 Susie Doetker Loralie Sue “Susie” (Mathews) Doetker, youngest daughter of William & Edna Mathews, was born November 27, 1943 in Imperial, Ne. As a young girl she grew up west of Imperial and graduated from Chase County High School in 1961.Susie went on to complete Business School in eastern Nebraska and was employed in Washington D.C. for a short time. Susie returned to Nebraska and was united in marriage to Kent Eugene Doetker at the United Methodist Church in Imperial, NE, on June 21, 1964. They made their home on a farm on the “South Divide” southwest of Wauneta, Ne. To this union was blessed with two sons, Jed & Kelly. Susie loved the western lifestyle and raised her boys to be hard-working men. She loved being around her grandchildren and watching them grow. Her older grandchildren loved to bake cookies, play in the backyard, and to sew with her. To her youngest two grandchildren, she was fondly known as "MeeMaw". Susie especially enjoyed calving season and enjoyed watching the calves in the spring. She was a very devoted wife, mother, Mother-in-law, and grandmother. Susie was baptized on March 27, 1956, at theUnited Methodist Church of Imperial. She was a member of the First United Methodist Church in Wauneta, a member of the chair (Secretary of the church), funeral dinner aide, and putting in a lot of other time into the church. She took on a lot of jobs within the community and took pride in each of them. Susie joined Imperial Chapter # 279 order of Eastern Star, Aug, 1962. Served in several positions prior to serving as a worthy Matron in 1971. She received her 50 year pin in September 2012. Susie departed this life Thursday afternoon, November 15, 2012, at her home and in the hands of loved ones in Wauneta, NE, at the age of 68. Susie was preceded in death by her parents William & Edna (Bremer) Mathews, sister; Lavon (Mathews) Pilchuck and Brother-in-Law Bill Pilchuck, Father-in-Law; Albert Doetker, and Mother-in-Law Velma (Fortkamp) Doetker; and a nephew Matt Pilchuck. Susie is survived by her husband, Kent; Son; Jed and wife DeAnn, Son; Kelly and wife Dawn, grandchildren Jordyn, Caid, Coleton, McKenna, & Kenton Doetker all of Wauneta, Brother Boyd & wife Joan Mathews of Imperial, Ne; Brother Byrdell and wife Gloria Mathews of Texas; Brother Gary and wife Joy of Texas, Brother-in-Law, Loren & wife Karen Doetker of Wauneta, Ne, special nieces and nephews, and very close friends. Memorial Services will be held Tuesday Morning, November 20th, 2012, 11:30 A.M. (MT), at the United Methodist Church of Wauneta, with Pastor Bonnie McCord officiating. A private family inurnment will be held before services. No Visitation, Susie chose cremation. Memorials have been established to Sunrise Heights Nursing Home of Wauneta, United Methodist Church of Wauneta, and the EMT’s of Wauneta, NE On Line condolences can be left at liewerfuneralhome.com LIEWER FUNERAL HOME OF WAUNETA IN CHARGE OF ARRANGEMENTS

The family of Susie Doetker created this Life Tributes page to make it easy to share your memories.