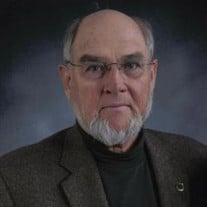 Stanley James Hansen, well-known gunsmith and farmer in the Benkelman area passed from his earthly home to his eternal home May 2, 2014. Stan was born June 29, 1940, the son of Thomas and Mabel Hansen. He attended school in Benkelman and was married to Joleen Fagan for thirty-six years. To this union two sons were born, Keith and Guy.                   In early years Stan was employed at the Ford garage in Benkelman, attended college in Wichita, Kansas, worked in Texas and graduated from gunsmithing school in Denver. He and his young family moved to Sacramento, California where he worked as a gunsmith for ten years. They returned to the family farm in Benkelman in the early seventies where Stan farmed and continued gunsmithing.                   Stan was an avid sportsman. Among his enjoyments in life were his hunting trips to Canada, Argentina and Africa and his fishing trips to Vancouver Island. Locally, over the years, he enjoyed goose, pheasant, turkey and deer hunting. Frequently, he hunted pronghorn in Wyoming. Stan had a life-long interest in shooting prairie dogs and doves. He particularly enjoyed prairie dog shoots with friends.                   He was preceded in death by his parents, brother ValGene and his first wife Joleen. Left to mourn his passing are his sons Keith (Saresa) Hansen of Georgetown, Texas, Guy Hansen (Barbara) of York, Pennsylvania, grandson Chris (Ann) Hansen of Norman, Oklahoma, brother Tom Hansen of Omaha, his second wife of eighteen years, Judy, stepdaughters Stephanie (Bob) McDonald, Katie (Dan) Gillis and granddaughter Jordyn Gillis all of Boise, Idaho, mother-in-law Elsie Schuman of Morris, Minnesota and brother-in-law Richard (Gail) Schuman of Atlanta, Georgia. Also left are nieces and families from Omaha, extended family and good friends.                   Stan had a deep and abiding faith in the Lord and attended Christian Union Church in Stratton, Nebraska. Viewing Tuesday, May 6, 3:00-7:00 CT; Funeral Wednesday, May 7, 1:30 CT, both at Christian Union Church in Stratton. Burial immediately following in Pleasant Valley Cemetery, Benkelman. A memorial has been established to the American Cancer Society, NRA, and the Southwest Ducks Unlimited. Stan's Casket will be closed at the FuneralOnline condolences can be left at liewerfuneralhome.com Benkelman Memorial Chapel In Charge of Arrangements

Stanley James Hansen, well-known gunsmith and farmer in the Benkelman area passed from his earthly home to his eternal home May 2, 2014. Stan was born June 29, 1940, the son of Thomas and Mabel Hansen. He attended school in Benkelman... View Obituary & Service Information

The family of Stanley J. Hansen created this Life Tributes page to make it easy to share your memories.

Stanley James Hansen, well-known gunsmith and farmer in the Benkelman...