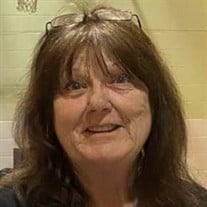 Sonia Lee Morris Ambrosek started her life journey July 12, 1954, in Grappenhall, England; she passed from this life on October 28, 2021. Sonia was the daughter of Lilian Doreen Langley Morris and Robert Lee Morris. Sonia came to the United States at about 18 months of age with her parents and older brother, Howard. They came to eastern Nebraska and then moved to Illinois, where she spent the majority of her childhood. Sonia married Leslie Ambrosek and moved to southwest Nebraska where she resided until her death. She had a steep learning curve with a different way of life and way of living. Sonia was never one to hesitate to expand her horizons and to learn new things. She embraced her new adventure with good will, enthusiasm and a willingness to learn. Sonia arrived as a young city girl and became a very capable mother, wife and business partner. She was a mother to her children, but always had time and attention for many more through the years. She was a mother to all. Sonia was willing to listen and provide guidance to all both young and old. She became a valuable part of the business, especially with the communication with people which she loved to do. Sonia was no stranger to work, working everyday unless confined to bed, mostly for others benefit. Sonia loved the sunrise and sunset, grandkids projects, and she loved the beauty of the hawks and owls and the mystic powers that they held for her, a love she encouraged others to notice and enjoy. Sonia was preceded in death by her parents Robert Lee Morris and Lilian Doreen Morris; father-in-law Gerald Andrew Ambrosek; and mother-in-law Eva Emma Tepley Ambrosek and other family members. Survivors include: Husband of 49 years: Leslie Ambrosek of Haigler, NE. Son: Gary Gann of Biloxi, MS. Daughter: Atheena Ambrosek and partner John Rhodes of Sterling, CO. Daughter: Courtney Ingold and husband Shaun of Wauneta, NE. Son: Chad Ambrosek and partner Joni Norden of Haigler, NE. Son: Wade Ambrosek and wife Stephanie of Imperial, NE. Daughter: Jerrah Ambrosek and partner Shauna Jenkins of Haigler, NE. Many other kids, grandkids and great-grandkids by blood and by choice. Sonia wished to acknowledge brothers Howard, Colin and Matt Morris for their love and support having been apart for many years. Funeral Services for Sonia will be held Friday, November 5, 2021, 11:00 a.m. (MT), at the Imperial Berean Church, Imperial, Nebraska, with Pastor Matt Maxwell and Deb Colvert officiating. Visitation will begin before services starting at 8:30 a.m. (MT), Friday, November 5, 2021, at the Imperial Berean Church, Imperial, Nebraska. A memorial has been established in Sonia’s memory to the Ambrosek family for a future designation. On-line condolences may be left at liewerfuneralhome.com LIEWER FUNERAL HOME ENTRUSTED WITH ARRANGEMENTS

The family of Sonia Lee Ambrosek created this Life Tributes page to make it easy to share your memories.