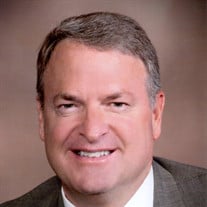 Sid Harchelroad Sidney Bruce Harchelroad was born September 25, 1960, in Imperial, Nebraska, to Gene B. and Wilva D. (Richards) Harchelroad. As a youngster, he grew up and attended school in Wauneta, Nebraska, graduating from Wauneta High School in 1979. Sid continued his education at Chadron State College, receiving his bachelor’s degree in 1983. He was also a member of the Chadron State Eagles’ football team. Sid returned to the family business (Harchelroad Motors) of Imperial and Wauneta after his college graduation, assisting his father, Gene, and brother, Brian, with ownership and operation. Sid married Carol LaRae (Anderson) Weiss on August 10, 1996, at their home on Enders Reservoir, where they resided until building a new home in Imperial in 2011. Sid was a man of many talents and many friends. He was also very stubborn. Sid always had big ideas that when paired with his attention to detail and determination were always accomplished! He had many passions in his life. From early on, whatever he did, he gave it his all to be the best. Sid ran track against the likes of Carl Lewis and held the receiving record for the Chadron State Eagles’ football team. He was a very accomplished and highly competitive athlete. Later in life, Sid developed a passion for auto racing and Corvettes. He proudly donated his time to community improvement and helping others; including the Chadron State College Foundation, the Imperial Community Foundation, and many other charities. He never missed the opportunity to give back. Sid had many hobbies including auto collecting and racing, boating, golfing, and he especially loved spending time with his grandchildren. Sid touched many lives and will be greatly missed. Sid passed away Tuesday, January 30th, 2018. He was 57 years of age. Survivors Include: Mother: Wilva Harchelroad of Wauneta, NE Wife: Carol Harchelroad, of Imperial, NE Daughters: Danielle Rozga (Levi) of Eagle, CO Amanda Jantz (Cody) of Imperial, NE Sons: Dillon Harchelroad (Ashley) of Imperial, NE Dustin Weiss (Cyndi) of Imperial, NE 7 Grandchildren: Beau Weiss, Norah Weiss, Hudson Rozga, Avery Jantz, Andy Jantz, Asher Weiss and Shane Jantz. Brother: Brian Harchelroad (Michelle) of Wauneta, NE Sister: Debra Kemp (Jim) of St. Louis, MO. Numerous nieces, nephews, cousins, and relatives. Sid was preceded in death by his father, Gene. Funeral services will be held Tuesday morning, February 6th, 2018, 11:00 A.M. (Mountain Time) at the Zion Lutheran Church of Imperial, Nebraska, with Pastor David Kahle officiating. A celebration of life will also be held Tuesday afternoon, February 6th, 2018, 5:00 P.M. – 8:00 P.M. (Mountain Time) at the Wellington School Gym, Imperial, Nebraska. A memorial has been established to the Imperial Community Foundation Fund, P.O. Box 1281, Imperial, NE 69033 On line condolences may be left at liewerfuneralhome.com LIEWER FUNERAL HOME ENTRUSTED WITH ARRANGEMENTS

Sid Harchelroad Sidney Bruce Harchelroad was born September 25, 1960, in Imperial, Nebraska, to Gene B. and Wilva D. (Richards) Harchelroad. As a youngster, he grew up and attended school in Wauneta, Nebraska, graduating from Wauneta High... View Obituary & Service Information

The family of Sidney B Harchelroad created this Life Tributes page to make it easy to share your memories.