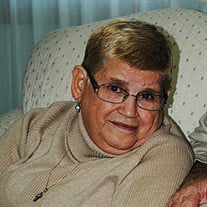 Sharon Kay Alley Raasch was born July 19, 1940, in Omaha, Nebraska, to Harold and Ruth Alley. Sharon was raised in Ashland, Nebraska. She attended both grade and high school in Ashland, Nebraska. She was an avid music lover and played the clarinet in the high school marching band. Sharon met the love of her life Wayne Raasch when she was in high school and as much as she loved music, when he proposed marriage, she sold her beloved clarinet to buy his wedding ring. The couple married on August 17, 1958, at the Christian Church in Ashland, Nebraska. Their marriage was blessed by three children: Dottie Rankin, Larry Raasch and Cindy Fischer. At the time of Wayne’s death, they were married 55 years. In the late 1960’s Wayne and Sharon moved from Ashland to Lamar, Nebraska. They farmed south of Lamar for about ten years. Sharon loved living on the farm and not surprisingly cooked not only for her family, but for many farm hands, harvesters and even hunters who enjoyed western Nebraska hospitality during hunting season. She soon became known for her cooking skills. Meals in the Raasch household were never boring, but instead were an occasion not to be missed. She carried on her culinary skills when she was the cook for Champion Grade School for several years. Her longtime dream had been to own a restaurant where she could cook to her heart’s content. Sharon and Wayne purchased and operated Champ-Inn and the Mill Room Bar in Champion. She was well known for her cooking and people came from near and far to enjoy her old fashioned, down home cooking. She would share and send recipes out three times a week to various people. When she was cooking in her restaurant, one could often find her walking table to table making sure everyone got enough food. She said no one would ever leave her restaurant hungry. The same could be said in our house. She always fixed enough food for us, all the neighbors and the county if need be. Sharon continued cooking in her restaurant for six or seven years until her health declined and she could no longer do it. In addition to her cooking, Sharon was known for her big angel collection and her even bigger Christmas decoration collection. It used to take Dad or us kids days to carry it all up from the basement and decorate everything. Sharon was also a member of the Eagles Club of Imperial, the Champion Community Center and she was an original member of the Champion Women’s Club. Sharon moved from Champion to Parkview Assisted Living and finally Imperial Manor in Imperial, Nebraska, where she lived until she was moved to a hospice room in Hillcrest Nursing Home in McCook, Nebraska, where she received kind and caring treatment for the last six days of her life. Sharon passed away Friday morning, July 17, 2020, in McCook, Nebraska. She was 79 years of age. Sharon was preceded in death by her parents, husband Wayne, her brother Larry Alley, grandchildren Levi and Christina Fischer, and brother-in-law Ron Bailey. Survivors include: Daughter: Dottie Rankin and husband Earl of Gillette, WY. Son: Larry Raasch and wife Tinker of Champion, NE. Daughter: Cindy Fischer and husband Gordon of Wauneta, NE. Five grandchildren: Kevin and wife Jennifer Ridlen, Lucas Ridlen, Kelsey Ridlen, Ryan Fischer and Logan Fischer. Two great-grandchildren: Ryder Storck and Kayton Fischer. Sister: Linda Bailey of St. Louis, MO. Sister-in-law: Sharon Lou Alley of Apache Junction, AZ. Funeral Services will be held Monday, July 27, 2020, at 10:00 a.m. (MT), at the Champion Community Center, Champion, Nebraska, with Rev. Melody Newman officiating. Inurnment will follow at Lakeview Cemetery, Champion, Nebraska. Memorials have been suggested to the Champion Community Center. Online condolences may be left at liewerfuneralhome.com. LIEWER FUNERAL HOME ENTRUSTED WITH ARRANGEMENTS

The family of Sharon K Raasch created this Life Tributes page to make it easy to share your memories.