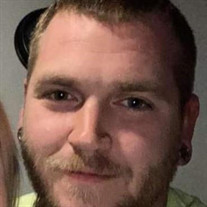 Shane Huff Shane Michael Huff was born January 18, 1992, in Colby, Kansas to Carol Macklin and James Huff. The youngest of three, Shane would always follow his brothers Kody and Boone around. Except when he was glued to his mom or grandma Huff. Over the years, Shane made many lifelong friends, several of which began as soon as he started school. He played on the Brewster, Kansas, football team for most of his high school career, graduated in 2010 and never lost his passion for the sport. In 2011, Shane moved to rural Enders, Nebraska, to be closer to family and started working at Artistic Woodworking. About a year later, Shane changed career paths and began working for Mike and Laura Lorimer down at The Auto Shop where he worked for 10 years. In 2021, Shane had decided he needed a career change and started working at Pivot Electric where he made fast friends and loved his work. In 2013, Shane reconnected with an old friend, Jenn Beckman, when down in Colby, Kansas, visiting. Their relationship blossomed over the years, and they were married in October 2018. They welcomed their beautiful daughter Lillian Rose in 2019. Even through trials and tribulations, nobody doubted how much he and Jenn cared for each other or how much he loved his daughter. Lilly meant the world to her daddy, and he made sure to remind her every chance he got. Shane's bright light was extinguished on May 8, 2022. Though, his life was cut short, the impact he made on the hearts and minds of those closest to him will be felt for many years to come. Shane was preceded in death by his brother Kuper Jones, Grandfather Merle Macklin Sr. stepfather Merle Macklin Jr; and grandmother and grandfather Huff. He is survived by his wife, Jenn, and daughter Lilly of Imperial, Mother Carol Macklin, of Wauneta; Father James Huff of Oakley, Kansas; brothers Shawn Macklin, of Denver, Colorado, Boone Huff of Colby, Kansas, Kody Huff, of Lincoln; Grandparents Dick and Marilyn Robbins, of Topeka, Kansas, and Twyla Macklin, of Imperial; Mother-in-law Deanna Beckman, of Ceresco. Sisters-in-law Sally (Ben) Sanford, of Lecompton, Kansas, Audrey Bergman, of Grand Rapids, Michigan; Brothers-in-law Patrick Bollig, of California, Peter Bollig, of China; nieces, nephews, aunts, uncles, cousins, and a host of close friends Memorial Services will be held, Saturday, June 4, 2022, 11:00 A.M. (MT) at the Imperial Berean Church, Imperial, Nebraska, with Pastor Matt Maxwell officiating. A private family inurnment will be held at a later date. A memorial, In Shane’s Memory, has been suggested to the Huff Family for a future designation. Online condolences may be left a liewerfuneralhome.com LIEWER FUNERAL HOIME ENTRUSTED WITH ARRANGEMENTS

Shane Huff Shane Michael Huff was born January 18, 1992, in Colby, Kansas to Carol Macklin and James Huff. The youngest of three, Shane would always follow his brothers Kody and Boone around. Except when he was glued to his mom or grandma... View Obituary & Service Information

The family of Shane M Huff created this Life Tributes page to make it easy to share your memories.