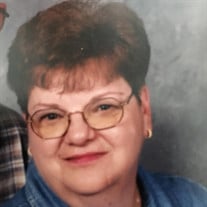 Sandra “Sandy” Browning was born June 6, 1949 to Keith and Evalynne (Saum) Powell in Grant, Nebraska. She grew up in Grant, and graduated high school with the class of 1967. It was during a junior high music contest in Chappell, Nebraska that Larry met Sandy when she was in the fifth grade and Larry was in the seventh grade. However, during this initial meeting, Larry “fibbed” about his age, when Sandy said she was in the fifth grade, Larry said, “So am I.” It was at this meeting that their love and friendship began, celebrating fifty years of marriage December 22, 2017. Larry and Sandy welcomed a son, Robi on July 2, 1974. Robi was a great addition to the relationship. Larry, Sandy and Robi moved to Imperial, Nebraska in 1979. Sandy began cutting hair at Guys & Dolls Salon. She then moved to Mary Ann’s Beauty Shop. Wanting to start her own business, Sandy moved and opened A Cut Above, renting a building from her brother-in-law, Ansel Hill. Sandy rented from Ansel for several years when an opportunity came to purchase the Skew-Gee Mill from Randy Jaeger. With A Cut Above in a new location, friendships were made, too numerous to mention. Sandy served the citizens of Imperial for several years, cutting hair and preparing and delivering fresh cut flower arrangements with Lori and Connie helping. Sandy finally retired in 2010. Grandkids came along and were another important part of her life. Sydney in 1995, Adrienne n 1997, Gunner in 2007 and newly adopted Jim in 2017. Gunner was grandma’s little “pumpkin” and loved weekends at the farm at grandpa and grandmas, getting “sugared up at grandma’s was fun!” Sandy passed away suddenly on March 31, 2018 at Great Plains Regional Medical Center in North Platte, Nebraska. She was 68 years of age. She was preceded in death by her parents, Keith and Evalynne; brother, Donald Powell; mother and father-in-law, Ralph and Dollie Browning and brother-in-law, Mack Hazen. She leaves to mourn, her loving husband of over 50 years, Larry; her son, Rob; grandkids: Sydney, Adrienne, Gunner and Jim; sisters-in-law, Janet Hazen, Joyce Hill and husband, Ansel, Connie Dart and husband, Ron, Linda Davis and husband, Jim, Jeanne Sievers and husband, Leon; special friend and cousin, Pam Koch and husband, Randy. Numerous nieces and nephews and friendships she cherished throughout her days, including all of her new “family” out at their farm, the Widgers, Mauchers and Holmes. Funeral services for Sandy Browning will be 2:00 P.M. (MT), Thursday, April 5, 2018 at the First United Methodist Church in Imperial with Randy Hayes and Pastor Dirk Weiss officiating. Interment will follow in Mount Hope Cemetery, Imperial. Visitation will be Wednesday afternoon, April 4, 2018 from 2:00 – 6:00 P.M. at the Funeral Home in Imperial. A memorial has been established in Sandy’s memory. Online condolences may be left at liewerfuneralhome.com LIEWER FUNERAL HOME IS ENTRUSTED WITH ARRANGEMENTS

Sandra &#8220;Sandy&#8221; Browning was born June 6, 1949 to Keith and Evalynne (Saum) Powell in Grant, Nebraska. She grew up in Grant, and graduated high school with the class of 1967. It was during a junior high music contest in Chappell,... View Obituary & Service Information

The family of Sandra "Sandy" Kay Browning created this Life Tributes page to make it easy to share your memories.