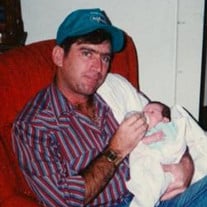 Russell Everitt Russell William Everitt, resident of Enders, NE went home to be with the Lord on November 3, 2014. He was born June 10, 1960 in Carthage MO to Lester and Alice (Britton) Everitt. Russ, the youngest of four children, grew up in Larkspur and Castle Rock Colorado. As a child he loved to climb the mountains and spoke fondly of the many family fishing trips spent in the area. When Russ was sixteen his family moved to Benkelman, NE. Russ graduated from Benkelman High School in 1978. Afterwards he studied Diesel Mechanics at Northwest Kansas Area Vo-tech in Goodland, KS. Latter he attended Walla Walla Community College in Walla Walla, WA. As a young man Russ enjoyed fishing, hunting and saddle broncing. Russ Started working odd jobs as a child. Later as a teenager and as an adult he worked for farmers, feedlots, and John Deere Implements. He was a distinguished cowboy and diesel mechanic. In 1982 he joined the United States Army working in Air Defense. He rose quickly to the rank of SGT. He continued to serve in the National Guard. And in 1997 Russ reenlisted in the US Army as a M1 Abrams Turret Mechanic. He spent his time serving in many countries including Korea and Panama. Russell served his country proudly and with honor. Russell had a soldier’s heart. Once a soldier, always a soldier. His wife and daughter were always proud of his sense of duty and honor not only to his country but fellow brothers in arms. It was in 1993 while living in Benkelman that Russell met the love of his life Vicky Ryan. They were married on April 9 at the Methodist Church in Max, NE. They shared twenty-one wonderful years together. To this union they were blessed with the birth of their daughter Chancey Elizabeth Everitt born September 14, 1994 in Imperial NE. Chancey was her daddy's girl. As a little one she would follow her daddy around wanting to watch everything he was doing. They were joined to the hip. It was from Russ that his daughter received her sense of humor, love of animals, talent for writing and love of both history and reading. It was also from her father that she learned to be a "Cow Chick" as he loved to call her. Russ was a great husband and father. Russ, Vicky and Chancey shared many treasured moments. They traveled through the States together. Shared many fishing trips, went on horseback rides, worked on many home projects and loved just spending time at home together. Life with Russ was always an adventure. Vicky and Chancey will always treasure the many precious memories they shared with their beloved husband and daddy. Russ was a kind hearted man. Always willing to help others. He was gentle and loving. Had a wonderful sense of humor and made friends easily. A hard worker, strong and wise beyond his years. Russell had a strong sense of honor in serving both his family and country. Preceding him in death are his father Lester Everitt, Mother-in-law Muriel Ryan, Brother-in-law Chester Reiman and his beloved horse Sugar. He is survived by his loving wife Vicky and daughter Chancey Everitt both of Enders; Mother Alice Everitt, Hastings; brother Mike (Julia) Everitt, Torrington, WY; sisters Laura Reiman, Kennesaw, NE; Rebecca (Jerry) Pursley, Tulsa OK; Father-in-law Jim (Diana) Ryan Sr. Santa Maria, CA; Brother- in -laws Jim Ryan Jr. Nipomo, CA; Mike Ryan & Friend Toni Hill of Ventura, CA; Sister-in-law Donna (Danny) Hale, Wauneta. Aunts, Uncles, Cousin, numerous nieces and nephews. Memorial Services will be 1:00 P.M. (MT), Saturday, November 8th, 2014 at the United Methodist Church of Wauneta with Pastor Bonnie McCord officiating. Full military honors will follow services. A private family inurnment will take place at a later date. No visitation; cremation was chosen. A memorial has been established in Russell’s Memory. Online condolences can be left at liewerfuneralhome.com LIEWER FUNERAL HOME OF WAUNETA IS ENTRUSTED WITH ARRANGEMENTS

Russell Everitt Russell William Everitt, resident of Enders, NE went home to be with the Lord on November 3, 2014. He was born June 10, 1960 in Carthage MO to Lester and Alice (Britton) Everitt. Russ, the youngest of four children,... View Obituary & Service Information

The family of Russell Everitt created this Life Tributes page to make it easy to share your memories.