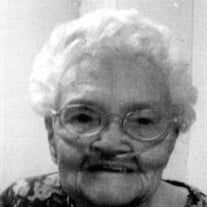 Ruby Anderson Ruby A. (Wolfe) Anderson was born May 13, 1919 to Sherman and Emma Rosela (Van Gilder) Wolfe in Max, Nebraska. Ruby passed away Monday evening, May 25, 2015, at the Sunrise Nursing Home in Wauneta. She was 96 years of age. Ruby attended school and graduated from Stratton High School at age 16 and began teaching in a one room school in the Hayes Center area one year later, age 17. Ruby attended the Barnes Business School in Denver and came back to this area to investigate a job at the Federal Farm Loan office which was being established in Wauneta. She was awarded the job and thus helped set up the office here and worked in that capacity for several years before becoming a stay at home mom. Ruby continued to be a long time resident of Wauneta. On May 26, 1939, Ruby married Wayne Anderson and to this union 2 children were born—Richard and Lynn. Striving to live a good Christian life was a priority in that she was a lifelong member of the church of Christ and hosted numerous home bible studies. She was preceded in death by parents and husband of 48 years, Wayne. Ruby is survived by: son Richard and wife Dot Anderson of Parker, CO; son Lynn of Kearney, NE; 4 grandchildren—Kathy and husband Dan Dalke, Parker, CO; Belinda and husband Brad Hayes of Littleton, CO; Julie and husband Jason Looney, of Castle Rock, CO; Scott and wife Jennifer Anderson, Castle Rock, CO; and 10 great-grandchildren. Graveside services will be held Saturday, May 30th, 2015, 10:30 A.M. (MT) at the Riverside Cemetery, Wauneta, NE, with Randy Hayes officiating. Private family visitation only. A memorial has been established to the Sunrise Heights Nursing Home of Wauneta, NE LIEWER FUNERAL HOME ENTRUSTED WITH ARRANGEMENTS

Ruby Anderson Ruby A. (Wolfe) Anderson was born May 13, 1919 to Sherman and Emma Rosela (Van Gilder) Wolfe in Max, Nebraska. Ruby passed away Monday evening, May 25, 2015, at the Sunrise Nursing Home in Wauneta. She was 96 years of age.... View Obituary & Service Information

The family of Ruby A. Anderson created this Life Tributes page to make it easy to share your memories.