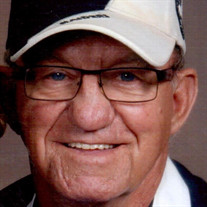 ROYCE BERNARD Royce Allen Bernard was born on March 29, 1945 in McCook, NE. George and Mabel brought him home to the South Divide to two sisters, Lois Ann and Jeannine. Royce worked alongside his parents on the homestead until he joined the Marines in 1963. Royce was stationed at Camp Pendleton until 1967. Royce served in the Reserves until 1969. He met Catherine Reed while in the Marines. They were married on April 30, 1967 in Lakewood California. They returned to the family farm to help his parents. Three children were born, Tommy, Becky and Melissa. In June 1984 he moved his family into Imperial. Royce worked for various farmers before starting at the Frenchman Valley Coop to drive a semi for the fertilizer department. Royce decided that over the road trucking was his calling so he began working for Bremer Transportation. Kip and Royce were quite a pair out on the road. Royce started his own trucking business through the advice of Kip in 2003. Royce leased his truck to Lindsey Transportation hauling irrigation sprinklers. He continued trucking until health issues made him retire in 2016. Royce’s semi-retired job was working for Jill, Brad and the Super Foods Gang. Royce passed away at home on Saturday, August 18, 2018 at the age of 73. Royce was preceded in death by his parents George and Mabel, his sister Lois Ann Langhofer, brother in law, Arlyn Cox and his in-laws Tom and Lucy Reed. Royce leaves behind to celebrate his life, his wife Cathy, son Tommy (Sally) Bernard, Becky Bernard and Melissa (Mark) Shaylor. Grandchildren Tanner, Hannah, Hailey Bernard, April and Max Bernard and Mark A. and Jaidyn Shaylor. His sister Jeannine Cox, nieces Lynette Johnson, Val Brush, Yolanda Ambrosek, Arlys Cupp and Tonya Lauer. Special friends John Speck, Pastor David, Merinda and Tapainga Kahle. Also, numerous great nephews, nieces and many lifelong friends. Royce choose to be cremated and not to have a funeral service. A memorial has been established to the Veterans Memorial Wall. LIEWER FUNERAL HOME ENTRUSTED ITH ARRANGEMENTS

The family of Royce A. Bernard created this Life Tributes page to make it easy to share your memories.