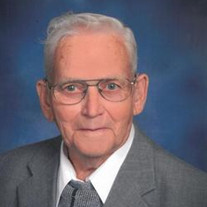 Roy League passed away at home Thursday, May 29, 2014 at the age of 88 years. Roy was born November 11, 1925 in Haigler, Nebraska to Ray and Anna League. His family moved to a farm south of Stratton, Nebraska when Roy was a young boy. He graduated from Stratton High School in 1943. Roy is survived by Ila, his wife of 64 years; son Gary League and his wife Reta; son Denis League and his wife Deborah, granddaughter Jeri Schlickbernd and her husband Mike, their child Maya; granddaughter Erica DeLeon and her husband Noel, their children Ethan, Jadyn and Bryn; grandson Derik League and his wife Amanda, their children Mariah, Ashley, Ryley, Hayden, and Taylor; grandson Dustin League; three brothers, Bob, Evan, and Kenneth, and two sisters, Eileen, and Delores. He is also survived by numerous nieces and nephews and a host of other family members and friends. He was preceded in death by his daughter Kathy, twin brother Ray, and six other brothers, Vearl, Bud, Howard, Mike, Dick, and Buck. Roy was a proud veteran having served in the Occupation of Japan and the Korean War. The Korean War broke out on June 1, 1950 - the day of Roy and Ila’s wedding. Roy was sent overseas shortly thereafter as a part of the 7th Cavalry and was critically wounded during infantry action in September of 1951. He was awarded numerous commendations including the Purple Heart. After returning to Stratton in late 1951, Roy went to work for the local lumberyard, CU Lionberger & Company. Roy and Ila purchased this lumberyard in 1976 and later purchased another in Benkelman. Roy was very proud that many of his employees went on to have their own successful construction businesses. The home centers continue in operation under Denis’s direction to the present time. Roy was proud to be a serving member of the Stratton community. Besides operating a successful business for over 50 years, at various times he served as mayor, town board member and school board member. Roy was involved with bringing the new hospital to Stratton and later renovating this building to become the Grandview Senior Center. Roy was an active member of the United Methodist Church for 60 years – serving on various boards and assisting with many building improvements. He never failed to credit their strength in God as carrying them through the many difficulties and sorrows he and Ila encountered in this life. Roy was well known by the community for his wit, sense of humor and his love of sports – the Huskers in particular. Roy and Ila traveled often to enjoy Nebraska Football. Above all, Roy loved his wife and family. He was especially fond of having his grandchildren and their families around him whenever possible. He will be sorely missed by his friends and family. Funeral services are 10:30 a.m. (CT), Monday, June 2, 2014, at United Methodist Church of Stratton with the Rev. Sheila Taylor officiating. Interment will follow at Rose Hill Cemetery in Stratton with full military honors. Visitation is 2 to 6 p.m. (CT), Sunday, June 1, 2014, at the United Methodist Church of Stratton. Memorials may be given to the Grandview Senior Center in Stratton or to Community HealthCare and Hospice of McCook. Online condolences can be left at liewerfuneralhome.com Benkelman Memorial Chapel is in charge of arrangements. Step forward now, you soldier, you’ve borne your burdens well, walk peacefully on heaven’s streets. (Author Unknown)

Roy League passed away at home Thursday, May 29, 2014 at the age of 88 years. Roy was born November 11, 1925 in Haigler, Nebraska to Ray and Anna League. His family moved to a farm south of Stratton, Nebraska when Roy was a young boy. He graduated... View Obituary & Service Information

The family of Roy Mervin League created this Life Tributes page to make it easy to share your memories.