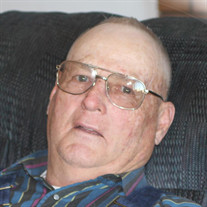 Ronald Frederick William Janicke, known as Buddy to longtime friends, was born August 13, 1937, in Lawrence, KS to Milton William and Fayetta Ville (Windhorst) Janicke. He was the second of three children, and their only son. Because his parents were both school teachers, the family moved frequently. Prior to his parents moving to Parks, NE, where Ron graduated from high school in 1955, the family had lived in Bellevue, Giltner, and Brule, Nebraska, among others. Upon graduation, he attended Hastings College, his dream of becoming an Aeronautical Engineer cut short, when after one semester, he chose to join the United States Navy in January of 1956. His hopes were to see the world, but he was instead stationed at Boca Chica Naval Air Station in Key West, Florida, working in the air control tower. Here he was able to explore the world of the oceans avidly pursuing his love of snorkeling and SCUBA diving. He returned to Dundy County, Nebraska and began working with his brother-in-law north of Benkelman. He married Lois Jean Snow on September 26, 1965.To this union were born three children. Ron and Lois purchased a farm south of Max, NE in 1969, where he resided until his death. The farm needed a well for irrigation and together Ron and Lois drilled that first one by hand. It wasn’t long until word had gotten around about that hand drilled well, and others needed water too. Ron built a drilling rig to begin his new venture. Waterhole, as he was known on the CB radio, eventually bought a drilling rig and soon established Janicke Drilling. He is responsible for many of the wells in the area still in existence today. He spent his retirement by continuing to farm and raise alfalfa until 2009. Like any good father, Ronald enjoyed the things that his children participated in. Julia was a track athlete when she was younger but gravitated to music and drama, which he loved. He loved watching and attending Clayton’s sports from baseball to football to motorcycles until Clayton quit racing. Together with Lois, he also loved chasing Kathryn around the country as she participated in track meets where she had excelled at a young age, through college, and beyond. His love for the children continued as he then continued attending events for his grandchildren whenever possible. Ron will be remembered by many as the man who blew things up as he cleared the land with dynamite. He was the man who could break pliers with one hand just by squeezing the handles together. He loved to hunt and made sure the deer and wild turkeys had habitat at the river. Hunters have come and gone over the years, but to Ron, they were more like extended family members. Rarely was anyone turned away. Ronald was proud of his military career and was a member of the American Legion where he served several terms as the Legion Commander. His patriotism is seen every time the flags fly at the Benkelman cemetery, as he made many of the flag poles. He made the pole where the flag flies every day at the Dundy County Courthouse. Atop that particular flag pole at the courthouse is a drill bit he had once used while drilling. He was appointed as an Admiral of the Great Navy of the State of Nebraska, an honor bestowed upon him after undertaking the project of building the first all weather track for Dundy County High School. He passed away peacefully at home surrounded by family on September 27, 2021 at the age of 84 years, 1 month, and 2 weeks. Preceding him in death were his parents Milton and Fayetta as well as several brothers-in-law and sisters-in-law. He is survived by his wife, Lois; his three children, daughter Julia (Julie Faye) Hesseltine of Halsey, NE, son Clayton Ronald and Lori Janicke of Bird City KS, and daughter Kathryn Dee and Kendall Black of Hildreth, NE; eleven grandchildren and 7 great-grandchildren with another on the way including: Chauncy and Amy Hesseltine (Ea Ray, Mea Jo, Rowdy and Ryder), Cord and Kylee Hesseltine (Adaline and baby boy due in November), Clancy Hesseltine, Caitlyn Hesseltine, Colt Hesseltine, Walker Janicke, Devon and Yazmin Janicke (Eli and Daniel), Jordan Janicke, Emmett Black, Zebediah Black and Lizzy Black. He is also survived by his older sisters Mary (Jim) Baney and Jane (Evart) Barton as well as many nieces and nephews. Funeral Services will be held Friday morning, October 1, 2021, 10:30 A.M. (Mountain Time) at the Janicke River Farm south of Max, Nebraska, with Rev. Jeffrey Powell officiating. Interment will follow at the Benkelman Cemetery, Benkelman, Nebraska, with full military honors. Visitation will be held Thursday afternoon, 3:00 P.M.-7:00 P.M. (Mountain Time) at the Benkelman Memorial Chapel, Benkelman, Nebraska, with the family present. Ronald’s casket will not be open for public visitation at services on Friday. A memorial has been suggested in Ronald’s memory, to the Janicke family, for a future designation. On line condolences maybe left at Liewer Funeral Home.Com BENKELMAN MEMORIAL CHAPEL ENTRUSTED WITH ARRANGEMENTS

Ronald Frederick William Janicke, known as Buddy to longtime friends, was born August 13, 1937, in Lawrence, KS to Milton William and Fayetta Ville (Windhorst) Janicke. He was the second of three children, and their only son. Because his parents... View Obituary & Service Information

The family of Ronald (Buddy) Janicke created this Life Tributes page to make it easy to share your memories.