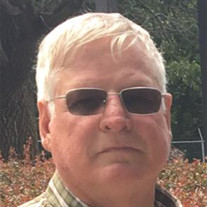 Rod Markee, 62 of Imperial Nebraska passed away on Monday, March 1st surrounded by his family. Rod, was born at LA General hospital in Los Angeles California, on August 1st 1958 to Gerald and Barbara Markee, he was the middle of five children. His siblings included Randy, Rita, Robin and Roy. Rod married his high school sweetheart in 1977, and to this union two children were born, Brad and Jessica. His Relationship with God was always present in his life. While his children were growing, Rod was active in the Boy Scouts, as a Scoutmaster, a Board of Trustee at the United Methodist Church, a Youth Group Leader, and Frequent Chauffer for the Girl Scouts. The foundation of his family, they were the most important thing to him, and he would drop anything for them, even if it meant driving 16 hours to change the starter in a car and turn around and drive home. If he knew someone was doing a project, he would stay awake and make sure the project was completed before he would go to sleep, Rod was an amazing grandfather to 5 grandchildren, Brad’s three girls, Hailey (15), Harley (13), and Hayden (10), and Jessica and her husband Trent’s children Alex (17) the only grandson, and Addy (13), and one step grandchild Morgan (20). He loved taking the time to teach them anything to wanted to learn, from fishing, or how to shoot a gun, change the oil or a tire, and build any project. You could often find Rod, in his garage tinkering with his classic car even though it ran perfectly. As a member of the Car Nutz club, he loved giving the Dodge and Ford members a bad time for driving the wrong kind of car. Rod also loved carpentry and built the families current home in 1996, and was always wanting to remodel something. An avid lover of the game of Chess he would always challenge anyone for a game. Westerns and war movies, NASCAR, and the Broncos were some of his favorites and always on in the garage. While attending high school he worked for Curry Feed and Fertilizer, in Elk Point SD, as a sprayer operator. He graduated from high School in 1977 from Elk Point High School. He continued his education at Wyoming Technical Institute in Laramie, Wyoming in Automotive Mechanics. After completion he returned to Elk Point to work for Dirks Motors as a Chevrolet technician, in Akron Iowa. Rod continued his lifetime career in the ag industry, in 1979 when he became a full-time employee for Curry’s. He continued working for Curry’s until 1982, when he made the move to Southwest Nebraska, to take an opportunity with Everett Alsbury with Alsbury Fertilizer in Parks, Nebraska. In 2003 Rod and his son Brad purchased building on Hwy 6 which is currently known as Markee Ag. He was active in daily operations alongside his son up until his passing. Rod is preceded in death by his father Gerald, and brother Roy. He is survived by his mother Barbara of North Sioux City, SD, wife Jeri, son Brad and (Lori), daughters Hailey, Harley, and Hayden of Imperial. Daughter Jessica and (Trent) children Alex, Addison and Morgan of Lincoln, NE. Brother Randy Markee of North Sioux, SD. Sister Robin (Randy) Fredricksen of North Sioux City, SD. Sister, Rita (Charlie) Dorniak of Las Vegas, NV. Brother-in-Law Larry (Carrie) Talbott of Imperial, and Brother-in-Law Doug (Linda) of Elk Point, SD. Numerous aunts, uncles, nieces, nephews, cousins and loved ones. Funeral Service will be held Friday, March 5, 2021, 2:30 P.M. (MT) at the Imperial Berean Church with Pastor Matt Maxwell officiating. A private family inurnment will follow at Mount Hope Cemetery, Imperial, NE No Visitation, Rod chose cremation. A memorial has been suggested to the Chase County FFA. On line condolences may be left at Liewer Funeral Home.Com LIEWER FUNERAL HOME ENTRUSTED WITH ARRANGEMENTS

Rod Markee, 62 of Imperial Nebraska passed away on Monday, March 1st surrounded by his family. Rod, was born at LA General hospital in Los Angeles California, on August 1st 1958 to Gerald and Barbara Markee, he was the middle of five children.... View Obituary & Service Information

The family of Rodney R Markee created this Life Tributes page to make it easy to share your memories.

Rod Markee, 62 of Imperial Nebraska passed away on Monday, March...