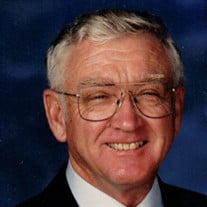 Robert (Bob) Thomas Robert Paul Thomas, born April 16, 1931 to Levi Thomas and Maggie (Sala) Thomas at Hollsopple, Pennsylvania, has completed his journey and is now with his Lord and Savior. He grew up in a Mennonite community, with his parents and 4 sisters. His first language was German. Bob, (as he was known) had dreams of going West as he watched the early Westerns on TV. His plans were put on old when his father died in 1951, leaving his mother and 3 younger sisters without a provider. He stayed on, helping the family for another 10 years. Bob then left to start his own life in Denver in 1961 and worked as a carpenter for 11 years. His plans to move to Montana at age 40 were changed when he met Norma Brown on a blind date. They married in 1971. His focus then shifted to building a home on Norma's parents farm Northwest of Stratton, NE. It took 5 years to compete. He designed and built most of the home himself. He then enjoyed working the land and raising cattle. He was a member of the United Methodist Church of Stratton. He sang and played guitar with Paul Erdman's Country Band and most recently with the Old Time Pickers. He also sang in a Barbershop choral group in McCook. He was an avid reader and his favorite author was Louis L'Amour. Bob and Norma celebrated 48 years of marriage on January 29th, 2019. Bob passed away Tuesday evening, February 5th, 2019, at the Sarah Ann Hester Memorial Home of Benkelman, NE. He was 87 years of age. Survivors Include: Wife: Norma Thomas of rural Stratton, NE Step-Daughter: Rita Crose of Benkelman, NE Step-Son: Mike Brown and wife, Teresa, of rural Stratton, NE 9 Step-Grandchildren: Trevor (Jennifer) Larsen, Tiffany O’Day, Tami (Fred) Schmitt, Tara (John) Laymon, Barrett (Abby) Brown, Blake Brown, Jennifer (Gary) Westrick, Robin Edgar, and Ethan (Heather) Edgar. 11 Step-Great-Grandchildren Sisters: Norma Thomas of Davidsville, PA Arlene Moser of Hollsopple, PA Bernadine Alderfer and husband, Ed, of Hamilton, OH Rhoda Dillon of Alexandria, VA Numerous Nieces and Nieces Bob was preceded in death by his parents, brothers-in-law: Paul Thomas, Clayton Moser and Jim Dillon Funeral Services will be held Tuesday afternoon, February 12, 2019, 2:00 P.M. (Central Time) at the United Methodist Church of Stratton, NE, with Pastor Rod Heilbrun officiating. Interment will follow at the Rose Hill Cemetery of Stratton. Visitation will be held before services Tuesday morning, February 12th, 2019, starting at 11:00 A.M. (Central Time) at the United Methodist Church of Stratton. A memorial has been suggested to the Sarah Ann Hester Memorial Home of Benkelman, Nebraska. Online condolences may be left a liewerfuneralhome.com BENKELMAN MEMORIAL CHAPEL ENTRUSTED WITH ARRANGEMENTS

Robert (Bob) Thomas Robert Paul Thomas, born April 16, 1931 to Levi Thomas and Maggie (Sala) Thomas at Hollsopple, Pennsylvania, has completed his journey and is now with his Lord and Savior. He grew up in a Mennonite community, with... View Obituary & Service Information

The family of Robert Thomas created this Life Tributes page to make it easy to share your memories.