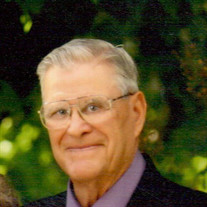 ROBERT R. HOHL Robert Rodney Hohl was born February 1, 1934, on the family farm south of Wauneta, Nebraska, to Fred and Bernice (Kitt) Hohl. As a young man he attended country grade school, and graduated from Wauneta High School in 1952. On August 28, 1955, he married Ruth Irene Hill, in Imperial, Nebraska, and to this union three children were born; Karmon, Ronald, and Kenneth. The couple first settled on the Truman Kitt farm (Robert’s grandfather), south of Wauneta. They continued farming for many years until retiring and making Wauneta their home. Bob, as he was known, was one of the first farmers to place irrigation wells on the south divide. He was a very meticulous farmer known for his straight tractor passes. Taking care of the land and planting trees was also very important to him. Bob didn’t stop with his own farming; he helped friends and neighbors whenever he could. He also owned and operated a wheat cleaning business in the later years. Bob was a member of the United Methodist Church of Wauneta, and a barbershop chorus group. He had many hobbies including, trap shooting, golfing, fishing, and attending farm sales and auctions with his friend Donald Donze. He assisted his children with their 4-H projects, and he especially enjoyed refurbishing old farm machinery, and riding motorcycles. Bob passed away Thursday afternoon, May 17, 2018, at the Wauneta Care and Therapy Center, Wauneta, Nebraska. He was 84 years of age. Survivors Include: Wife: Ruth, of Wauneta, NE Daughter: Karmon Johnson and husband, Rick, of McCook, NE Son: Ronald Hohl and wife, Joni, of Loveland, CO. Son: Kenneth Hohl, of Wauneta, NE Grandchildren: Aaron Felker, (Nen) and their children: Jeremy, Gabriel, and Isaiah Dayle Laird (Brandon) and their child, Brohdy Clint Johnson Alex Hohl Bob was preceded in death by his parents, brother; Truman Hohl and granddaughter; Amanda Hohl. Memorial services will be held Tuesday, May 22, 2018, 11:00 A.M. (Mountain Time) at the United Methodist Church of Wauneta, with Pastor Elias Mukindia and Rev. Gary Hunt officiating. Inurnment at Riverside Cemetery, Wauneta, Ne, will be held at a later date. A memorial has been suggested to the Wauneta Nebraska EMT’s Online condolences maybe left a liewerfuneralhome.com LIEWER FUNERALHOME OF WAUNETA IS ENTRUSTED WITH ARRANGEMENTS

The family of Robert Hohl created this Life Tributes page to make it easy to share your memories.