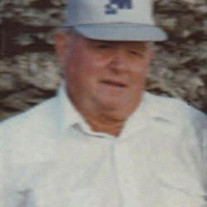 Robert (Bob) Leon Fanning Robert (Bob) Leon Fanning was born January 11, 1933, in Chase County, Nebraska, to Vern and Velma (Barnes) Fanning. Bob attended Chase County high School and at the age of 17 he entered the US Navy serving in the Korean War aboard the USS Okanagen. He was honorably discharged in October, 1959. He was united in marriage to Berneice Artist Jones on April 29, 1956 at the Crete Church west of Champion. They were blessed to have 59 years of marriage together. To this union 3 children were born: Marty, Mark and Mike. During the course of his life, he was a successful farmer and rancher throughout Chase County, from which he never retired. He enjoyed hunting, fishing and spending time with his grandchildren and great-grandchildren. He was a member of the Andrew Kinder Post #4688 for many years. Bob passed away Wednesday morning, March 25th, 2015, at his home in rural Chase County. He was 82 years of age. Bob was preceded in death by his parents, Vern and Velma Fanning; and brother, Charlie. Survivors include: His wife, Berneice Fanning of Wanueta Sons: Marty Fanning and Fiancé, Marci of Wauneta; Mark Fanning and wife, Karen of Imperial and Mike Fanning and wife, Elania of Enders. 4 grandchildren, 1 step-grandchild: Maverick Fanning, Ross Fanning, Mason Fanning, Carson Fanning and Kelsi Chuven 4 Great-grandchildren: Kegan, Clayton, Michael and Mardi Sister, Betty Kraxberger and husband, Frank of Alaska Brother, Carl Fanning and wife, Joanne of Alaska Sister, Kay Castle and husband, Merlin of Imperial Sister-in-law, Ruth Fanning of Oregon Sister-in-law, Burnetta Ahrens and husband, Bob of Imperial A host of nieces, nephews and friends. Funeral services will be 2:00 P.M. (MT), Saturday afternoon, March 28th, 2015 at the United Methodist Church of Wauneta with Pastor Bonnie McCord officiating. Interment will follow at Riverside Cemetery in Wauneta with full military honors. Visitation will be Friday afternoon, March 27th, 2015 from 2:00 – 6:00 P.M. (MT) at the funeral home in Wauneta. Memorials are suggested to the Wauneta United Methodist Church, Wauneta American Legion and the Imperial VFW. Online condolences can be left at liewerfuneralhome.com LIEWER FUNERAL HOME IS ENTRUSTED WITH ARRANGEMENTS

The family of Robert "Bob" Fanning created this Life Tributes page to make it easy to share your memories.