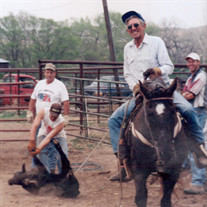 Robert Ellsworth Hanna was born to Forest and Lenore (Leidig) on August 19, 1928 at the family farm in rural Hayes County, Nebraska. Lenore passed away when Robert was just a couple years old and his father married Faye Bamesberger. Bob attended school in Wauneta and graduated from Wauneta High School with the class of 1946. He was inducted into the United States Army on October 30, 1950. He served in Korea and rose to the rank of Sergeant First Class by the time he was released to the Reserves in 1952 where her served for another 4 years. Robert was united in marriage to Marjory Garey on May 15, 1954 in Edison, Nebraska. The couple settled on the farm on the Stinking Water River in Hayes County. Bob was a lifelong farmer and rancher. He also operated an air-conditioning repair service, worked as a butcher, helped Fanning Auction Service and setup machinery at Midwest Farm Equipment. In addition to his work ethic, Robert was also very active in the community. He was a member of the Willard Hansen American Legion Post # 304 in Wauneta and served as commander. He was a member of the United Methodist Church, served on the Fire Board and was an assistant Scout Leader. Bob enjoyed reading, western movies, coffee with his friends and all animals from farm animals to pets. Robert "Bob" Hanna passed away Thursday evening, March 29, 2018 at the Imperial Manor Nursing Home in Imperial. He was 89 years of age. He was preceded in death by his parents, Forest and Lenore Hanna and his step-mother, Faye Hanna; brothers, Donald and Charles; and sisters-in-law, Bonnie Hanna and Jeannie Garey. Survivors include: Wife, Marjory Hanna of Wauneta, NE Son, Michael Hanna and wife, Robin of Wauneta, NE Son, David Hanna and wife, Cathy of Imperial, NE Daughter, Nancy Hanna Munderloh and husband, Doug of Colby, KS Grandchildren: Matthew (Tanna) Hanna, Michael Hanna, Stephen (Erika) Hanna, Robert Garrett Hanna, Hannah (Jared) Callahan and Sam (Rebecca) Munderloh 7 great-grandchildren Brother-in-law, Neal Garey of Grand Island, NE 4 nieces and 2 nephews The family will great friends and hold an open house on Saturday, April 7, 2018 from 9:00-11:00 A.M. (MT) at the Wauneta Community Building / Legion Hall. No visitation; Bob chose cremation. A memorial has been established in Robert’s memory and will be designated at a later date. Online condolences may be left at liewerfuneralhome.com LIEWER FUNERAL HOME IS ENTRUSTED WITH ARRANGEMENTS

The family of Robert "Bob" Hanna created this Life Tributes page to make it easy to share your memories.

Robert Ellsworth Hanna was born to Forest and Lenore (Leidig)...