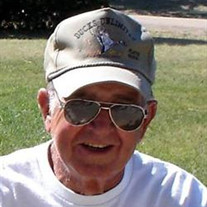 Robert B. “Bob” Bellamy was born December 19, 1929 in Wauneta, NE., and passed away at his home in Valley, NE., on September 29, 2014. He was preceded in death by his mother, Ida Irene Irelan Bellamy, and David D. Bellamy (who died when Bob was only 10 years old). Each of his three siblings also passed before him including a brother, Stewart (who died as a child); a sister Phyllis; and his brother Craig. Bob attended schools in Stratton, and Max, NE., then joined the Navy in October of 1950 serving in the gunnery division aboard the aircraft carrier “Rendova.” Bob was an atomic war veteran, having taken part when the world’s first hydrogen bomb was detonated in 1952 on a large atoll called Eniwetok in the Marshall Islands. On April 14, 1952, Bob was united in marriage to Patricia Ann “Pat” Mundt. Together, they raised four children: Robert A.“Rob” Bellamy (Kaye) of Elkhorn, NE; Michael J. Bellamy (Mary) of Waterloo, NE; Jill A. Reeves (Alan) of Elkhorn, NE.; and Tricia L. Wieczorek (Joe) of Omaha, NE. Early in life, Bob worked for Ochsner Pontiac, Debus Bread Co., Culligan, and Standard Oil. He opened his own gas station in 1963 on Nebraska Highway 34 in Max NE, later selling the business in 1976. Bob worked for 13 years as a Bus Barn supervisor and mechanic for Dundy County Schools and spent his retirement years repairing small engines. Also left to mourn his passing are eight grandchildren: Valerie Wright (Mark) of Gardner, KS; Tanner and Austin Bellamy of Waterloo, NE; Shannon Reeves of Ames, IA; Zackary and Kaleb Wieczorek of Omaha, NE; Dina Bellamy of Elkhorn, NE; and Garret Cobb of Silverdale, WA. Also, three great-grandchildren: Adelyn Wright of Gardner, KS; Evan Bellamy of Elkhorn, NE; and Michael Overfield of Omaha, NE. Bob deeply loved his home in southwest Nebraska where he lived for more than 75 years, yet he made many new friends in the Valley, NE community where he and Pat moved in 2006. Bob never met a stranger he couldn’t befriend or an animal he didn’t love. He was an avid outdoorsman who loved hunting and fishing. He was devoted to his wife of 62 years, his grandchildren and the many animals and dogs he loved throughout his lifetime. Graveside Memorial Services will be 10:30 A.M. (MT), Saturday, October 4th, 2014 at the Benkelman Cemetery, Benkelman Nebraska with full military Honors. There will be no visitation; cremation was chosen. A Memorial has been established in Bob’s Memory. Online condolences can be left at liewerfuneralhome.com BENKELMAN MEMORIAL CHAPEL IS ENTRUSTED WITH ARRANGEMENTS

The family of Robert "Bob" Bellamy created this Life Tributes page to make it easy to share your memories.