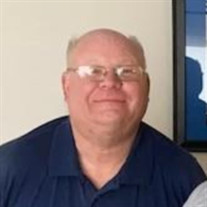 Rick Welch Rick Lee Welch was born April 23, 1968, in Omaha, NE, and became the first child of his proud parents, Jack and Karen Welch, by adoption in June 1968. Rick was baptized into the Christian faith at United Methodist Church in Imperial, NE, shortly after his adoption. Rick grew up in Imperial and during his junior high and high school years, he was so proud to make his contribution to athletics as a student manager for boys’ sports. Rick graduated from Chase County High School in 1987 and then moved to McCook, where he worked as a cart pusher for over 30 years at Walmart and more recently, local grocery stores in both Imperial and McCook. Rick had a passion for bowling, belonging to leagues in McCook and Imperial. He also competed in state bowling for Special Olympics and several times attended the National Special Olympics competition. Rick had the ability to make friends wherever he would go, and you could always find him at any sporting event. He had a love for high school sports and was always an avid Longhorn fan. In most recent months, Rick took on the role of helping care for his parents while also working at his favorite hang-out, Kwik Stop. Rick spent his last day, his 54th birthday, doing what he loved – helping cut up a tree. He passed away on April 24, 2022, at his parents’ home in Imperial. Rick was preceded in death by his grandparents: Linus (Jake) and Elda Welch and Clayton and Iva Mae Meyer; cousin: Jim Welch; and aunts and uncles: Ron and Connie Tellier, Jean Welch, Bev Claney, and Dwight Welch. Those left missing him greatly are: Parents: Jack and Karen Welch of Imperial, NE. Sister: Melissa (Josh) Oamek of Fort Calhoun, NE. Aunts and Uncles: Don Welch of Imperial, NE; Richard and Lynn Meyer of Imperial, NE; and Dale and Elvina Hiatt of Carrollton, TX. Numerous cousins, other family members, and a host of friends. Funeral Services for Rick will be held Thursday morning, April 28, 2022, 10:30 a.m. (MT), at the United Methodist Church, Imperial, NE, with Pastor Debra Copple officiating. Interment will follow at Mount Hope Cemetery, Imperial. Visitation will be held Wednesday afternoon, April 27, 2022, 2:00-6:00 p.m. (MT), at the funeral home in Imperial. A memorial in Rick’s memory has been suggested to the Welch family for a future designation. On-line condolences may be left at liewerfuneralhome.com LIEWER FUNERAL HOME ENTRUSTED WITH ARRANGEMENTS

Rick Welch Rick Lee Welch was born April 23, 1968, in Omaha, NE, and became the first child of his proud parents, Jack and Karen Welch, by adoption in June 1968. Rick was baptized into the Christian faith at United Methodist Church in Imperial,... View Obituary & Service Information

The family of Rick L Welch created this Life Tributes page to make it easy to share your memories.