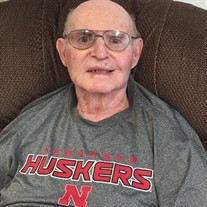 Richard Wade Greeley was born to Wade Raymond and Lydia Bertha (Kerchal) Greeley on June 8, 1936 at the family farm house in Hayes County, Nebraska. He attended elementary and high school in Hayes Center and graduated with the Class of 1953. After graduating, Richard farmed in the Hayes Center area and worked for Hayes Center Coop Oil. He was inducted into the United Sates Army on August 6, 1957. He was stationed in Germany for just over a year and upon returning home was honorably discharged on May 5, 1959. Richard married Lois Ann Denker on April 2, 1961 at St. Paul’s Lutheran Church in rural Wauneta, Nebraska. The couple made their home in Wauneta until Rich was activated from his Army Reserve status on October 16, 1961and the couple made their home at Fort Lewis, Washington. Having served his country, Rich was honorably discharged on August 10, 1962 and he and Lois returned to Wauneta where they would share the rest of their lives together. Richard returned to Wauneta Coop Oil where he would work for a total of 39 years, serving as general manager for 12 of those years from 1988-2000. During this time he also kept busy selling Rain and Hail insurance. Rich was active in the local community; the Low Housing board, Redeemer Lutheran Church board and the Legion and VFW were just a few of the local organizations that he willingly dedicated his time towards. In addition to his work and service to the community Rich enjoyed golfing, playing cards and watching Husker Football. Richard passed away Monday afternoon, February 10, 2020 at the Wauneta Care and Therapy Center. He was 83 years of age. He was preceded in death by his parents, wife, Lois, and sister Judy Greeley. Survivors include his daughters, Rochelle Wieman and husband, Gary of Lincoln and Rhona O’Neil and husband, Brian of Wauneta; grandchildren: Brittany (Scott) Johnson of Craig, Colorado, Brandon (Dawnica Adams) O’Neil of Wauneta, Morgan Wieman of Lincoln and Keaton Wieman of Lincoln; great-grandchildren: Kylee O’Neil, Tara O’Neil, Evan Johnson and Brogan Johnson; sister, LaVerda Loomis and husband, Donald of Arvada, Colorado and sister-in-law, Elinor Denker of Wauneta. Funeral services for Rich Greeley will be 10:30 A.M., Friday morning, February 14th, 2020at Redeemer Lutheran Church in Wauneta with Pastor Keith Wellman officiating. Interment will follow in Riverside Cemetery, Wauneta with full Military Honors. Visitation will be Thursday afternoon, February 13th, 2020 from 2:00-6:00 P.M. (MT) at the Funeral Home in Wauneta. A memorial has been established to the Alzheimer’s Association. Online condolences may be left at liewerfuneralhome.com LIEWER FUNERAL HOME OF WAUNETA IS ENTRUSTED WITH ARRANGEMENTS

Richard Wade Greeley was born to Wade Raymond and Lydia Bertha (Kerchal) Greeley on June 8, 1936 at the family farm house in Hayes County, Nebraska. He attended elementary and high school in Hayes Center and graduated with the Class of 1953.... View Obituary & Service Information

The family of Richard "Rich" Greeley created this Life Tributes page to make it easy to share your memories.