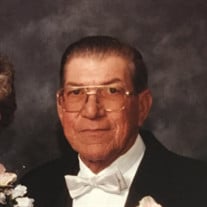 Richard “Dick” Robert Houghton was born to William J. and Marean (Siddons) Houghton on May 25, 1940 in Aberdeen, South Dakota. Dick attended school in Omaha, Nebraska where he graduated from high school. Shortly after graduating Dick was inducted into the United States Army where he served honorably until his discharge on August 31, 1969 at the rank of Specialist. Dick married Patty Gardner on November 10, 1973 in Denver, Colorado, where the couple first settled. In 1978, they moved to Enders, Nebraska where they purchased and operated Laker’s Delight for several years. Dick was well known in the area for his greeting of “Howdy Howdy” as people entered the convenience store; he used the phrase so regularly that many people knew him simply as the Howdy Howdy Man. Dick and Patty eventually sold Laker’s Delight and moved to Imperial where he went to work for Valley Pro Irrigation and then Frenchman Valley Coop until his retirement. In retirement, Dick continued his hobby of woodworking and enjoyed traveling to visit family in Colorado. Dick passed away on Thursday, January 30, 2020 at his home in Imperial. He was 79 years of age. He was preceded in death by his parents and wife, Patty. Survivors include: Daughter, Sandra Coon and husband, Mike of Colorado Springs, Colorado Son, Rich Houghton and wife, Becky of Littleton, Colorado Daughter, Bernetta Houghton of Ocala, Florida Grandchildren, Caitlin and Ben Houghton Brother, William "Bill" Houghton and wife, Karen of Ohio Brother, Don Houghton of Lakeland, Florida Sister-in-law, Colleen Lynch and husband, Herb of Lakewood, Colorado Sister-in-law, Nancy Gardner of Lakewood, Colorado Brother-in-law, Jim Cunningham of Golden, Colorado Memorial services will be 1:00 P.M. (MT), Saturday, February 8, 2020 at Liewer Funeral Home in Imperial with Pastor Melody Newman officiating. Inurnment will follow services in Mount Hope Cemetery in Imperial with full Military Honors, No viewing; cremation was chosen. Memorials can be made to the Family of Dick Houghton for future designation. Online condolences may be left at liewerfuneralhome.com LIEWER FUNERAL HOME IS ENTRUSTED WITH ARRANGEMENTS

The family of Richard "Dick" Houghton created this Life Tributes page to make it easy to share your memories.