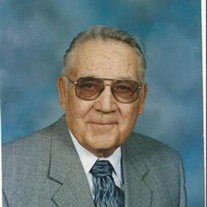 Raymond W. Stehno, 89, one of five children of Frank and Mary Sis Stehno was born on a farm 5 ½ miles southeast of Stratton, NE on December 9, 1924 and departed this life on March 21, 2014.   Ray was a life long resident of Hitchcock County in the Stratton area. He graduated from Stratton High School and attended the University of Nebraska College of Agriculture in Lincoln. He was a member of Alpha Gamma Rho Fraternity. He served for 38 months in the United States Army Air Force during World War II, spending one year in the South Pacific on the island of Tinian, on Iwo Jima, and in the Philippines, as a radar navigator aboard a B-29 superbomber. Ray remained in the Air Force Reserve for 9 years, obtaining the rank of First Lieutenant.   He was united in marriage to Adeline Janousek on October 23, 1946, at St. John’s Catholic Church in rural Beardsley, Kansas. To this union 5 children were born: Karen, Frank, Janet, Lynda and Anita.   Ray served on the Hitchcock County ASCS Committee from 1947 until 1959 and as District Director for the Nebraska State Committee from 1961 until his retirement in 1989. He was a licensed real estate broker for 30 years. He served on the Farmers Grain Co-op board and on the Hitchcock County Veteran’s Service Committee. He was a life long member of St. Joseph Catholic Church in Stratton, a member of the Benkelman-Stratton Knights of Columbus and a life member of both the Stratton VFW and American Legion. Ray was the Grand Marshall of Stratton Days Fall Festival Parade in 2011.   Ray and his wife farmed on the North Divide for 45 years before moving into their new home in Stratton in 1991. Ray also had farming interests in Kansas.   Although he was diagnosed with malignant cancer, in the 1980's, he received treatment at the Mayo Clinic and remained cancer free for the rest of his life.   He was preceded in death by his wife, Adeline, in 2002, his parents, Frank and Mary Stehno, his brother, Eddie in 2004, and his brothers-in-law, James Weskamp and Alan Dean.   Ray is survived by his 5 children: Karen and husband Kenneth Stute of Holdrege, Frank Stehno and wife Patricia of Stratton, Janet and husband Gary Faimon of Perry, KS, Lynda and husband Bob Wilkinson of North Platte and Anita and husband Gerard Pochop of Atwood, KS; 3 sisters, Rose and husband James Brinks of LaPorte, CO, Regina Weskamp of Omaha, and Marie and husband Joe Stavas of Columbus, 11 grandchildren, 22 great grandchildren, other relatives and friends.   Rosary will be at 7:00 P.M. (CT), Monday evening, March 24th, 2014, and visitation will be from 2:00 P.M. - 6:00 P.M. (CT), Monday, March 24th, 2014, Mass of Christian burial will be at 10:00 A.M. (CT), Tuesday morning, March 25, 2014, with Father Tom Wiedel and Father Bernard Lorenz celebrating. All services will be at St. Joseph’s Catholic Church in Stratton, NE. Interment will follow at Rose Hill Cemetery.   BENKELMAN MEMORIAL CHAPEL IN CHARGE OF ARRANGEMENTS In lieu of flowers, memorials may be given to St. Joseph Catholic Church or to Grandview

Raymond W. Stehno, 89, one of five children of Frank and Mary Sis Stehno was born on a farm 5 ½ miles southeast of Stratton, NE on December 9, 1924 and departed this life on March 21, 2014.   Ray was a life long resident of Hitchcock County... View Obituary & Service Information

The family of Raymond Stehno created this Life Tributes page to make it easy to share your memories.

Raymond W. Stehno, 89, one of five children of Frank and Mary...