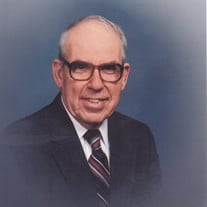 Raymond Burdett Maxfield was born to Bartolet “Bert” and Edna (Burk) Maxfield on February 7, 1919 in Williston, North Dakota. He attended school in Wauneta, Nebraska and graduated with the Wauneta High School Class of 1936. Raymond married Betty Grimm in Denver, Colorado in 1939 and the couple would enjoy 64 years of marriage. Betty and Raymond lived in Wauneta their entire married life where he worked at the Wauneta Roller Mills until it was sold on January 12, 2012 to Rogan and Ashley Einspahr. In addition to his time spent at the Mill, Raymond also was a member of the United Methodist Church of Wauneta and was a member of the Town Board. He was proud of winning the Christmas Lighting Contest, Yard of The Month, being Grand Marshall the Harvest Festival and having the Mill placed on the Nebraska Historical Registry. Raymond moved into the Sunrise Heights Nursing home in Wauneta on March 11, of 2013 and passed away there early on the morning of April 2, 2016. He was 97 years of age. Preceding him in death were his parents, wife, Betty, sisters: Dorthy Dudek and Emma Jean Maris, brothers-in-law: Leonard Dudek, Lowell Grimm and Charles Allen. Survivors include: Son, Jim Maxfield and wife, Connie of Wauneta, Nebraska Son, Jeff Maxfield and wife, Kay of Taylorville, Illinois Grandchildren: Heidi Southward of North Platte, Nebraska; Amy Maxfield of Omaha, Nebraska; Bert Maxfield and wife, Johnne of Oakley, Kansas; Todd Maxfield and wife, Jennifer of Tuscola, Illinois; Eric Maxfield and wife, Sarah, of Oak Park,Illinois Great-grandchildren: Nathaniel Southard of Omaha, Nebraska; Rachel Southard of Kearney, Nebraska; Taylor and Kylee Maxfield of Oakley, Kansas; Ella and Will Maxfield of Tuscola, Illinois and Logan and Jane Maxfield of Oak Park, Illinois Brother-in-law, Merrill Maris of Wauneta, Nebraska Sister-in-law, Myra Grimm of Wauneta, Nebraska Sister-in-law, Miriam Allen of Des Moines, Iowa Graveside Inurnment services will be Saturday, June 11th, 2016, 2:00 P.M. (Mountain Time) at Riverside Cemetery ,Wauneta, with Pastor Bonnie McCord officiating. No visitation; cremation was chosen A memorial has been established to the United Methodist Church of Wauneta or Donor’s Choice. Following graveside services, the family will gather at the Wauneta Senior Center for coffee and fellowship to celebrate Raymond’s life. Online condolences can be left at liewerfuneralhome.com LIEWER FUNERAL HOME OF WAUNETA IS ENTRUSTED WITH ARRANGEMENTS

The family of Raymond B Maxfield created this Life Tributes page to make it easy to share your memories.

Raymond Burdett Maxfield was born to Bartolet “Bert” and Edna...