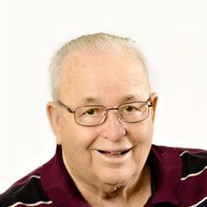 Raymond Edward Bley, age 85, was born November 2, 1929, to Jacob and Katie (Duhm) Bley on the family farm in the Eden community and grew up there. He attended grade school in rural schools. High School was attended in Wauneta, and he later received his GED. In May of 1951, he married his grade school sweetheart, Lois Harrison. To this union were born three children; Lynetta, Lloyd, and a baby boy, Lauren Leroy, who died in infancy. Ray was drafted into the army in 1951 and discharged in 1953, remaining in the Army Reserve until 1959. He served in the Medics in Italy during the Korean War. He was always happy to tell of his army experiences while living in Italy. He started farming with his father before he was drafted and happily went back to farming when he returned from the service. He and Lois raised their two children in the farm house his grandparents, Harm and Lizzy Duhm and his parents, Jacob and Katie Bley formerly owned. Ray and Lois moved to Wauneta in 1995. Ray enjoyed farming and especially loved to raise cattle. His hobbies were clock collecting and attending auctions. Ray grew up faithfully attending the Eden Missionary Church. Later he became a member of the Stratton Wesleyan Church, faithfully helping with the services. After the Wesleyan Church closed in Stratton, he attended the Immanuel Missionary Church in Wauneta, where his son pastored. Later he attended the Southwest NE Holiness Church which was the former Eden Missionary Church, as long as his health allowed. He left a victorious Christian testimony on the day of his departure to be with Jesus. Raymond passed away Saturday evening, December 13th, 2014 at his home in Wauneta, Neb. He was preceded in death by his parents and brothers, Herman Bley and Alvin Bley. He loved his family and leaves to mourn his passing his wife, Lois Bley of Wauneta, daughter, Lynetta and husband, Arlan Wine of Wauneta, son, Lloyd and wife, Durenda Bley of Wauneta. Grandchildren: James McNab, Jeralyn Wine, Christopher Bley and Christina Hunter, Brother, Ervin and wife, Elaine Bley, sisters in law: Bonnie Bley, Nadine Bley, Beulah Harris, and Florence Hegwood, and one brother in law, Milton Hegwood. Many nieces, nephews, relatives and friends. His sense of humor will be missed by those who knew him. Funeral Services will be 11:00 A.M. (CT), Thursday, December 18th, 2014 at the Southwest Nebraska Holiness Church (formerly Eden Missionary Church) in rural Wauneta, Neb. with Rev. Mike Kline officiating. Interment will follow at Eden Cemetery, Rural Wauneta, Neb. Visitation will be Wednesday afternoon, December 17th, 2014 from 5:00-7:00 P.M. (MT) at the funeral home in Wauneta, Neb. A memorial has been established to the Southwest Nebraska Holiness Church Improvement Fund. Online condolences can be left at liewerfuneralhome.com LIEWER FUNERAL HOME OF WAUNETA IS ENTRUSTED WITH ARRANGEMENTS

Raymond Edward Bley, age 85, was born November 2, 1929, to Jacob and Katie (Duhm) Bley on the family farm in the Eden community and grew up there. He attended grade school in rural schools. High School was attended in Wauneta, and he later received... View Obituary & Service Information

The family of Raymond Bley created this Life Tributes page to make it easy to share your memories.