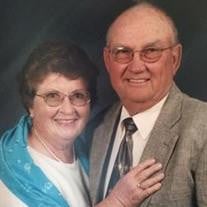 Raymond Floyd Parman was born to Floyd and Ethel Dora (Enfield) Parman on June 16, 1931 in Benkelman, Nebraska. He attended school in Benkelman and graduated from Benkelman High School in 1948. After high school he was inducted into the United States Army in March of 1950. Floyd served his country honorably and was awarded the National Defense Service Medal and the Occupation Medal for his time spent overseas. He was honorably discharged as a corporal on March 10, 1954. After his separation from the Army Floyd returned to Benkelman and married Elizabeth Jones on May 30, 1954. The couple moved into the family farm 14 miles north of Benkelman and lived there for more than 61 years. Floyd worked hard on the family farm and ranch for the remainder of his life. He was proud of the fact that he never truly retired. In addition to the busy life on the farm he was also very active in the community. Floyd was a member of the Masonic Lodge in Benkelman as well as the Benkelman United Methodist Church. He was also a 4-H leader, and served on the school board, hospital board and the NRD board. Floyd’s other hobbies and passions included ham radio, model airplanes, playing bridge, riding horses, riding motorcycles, fishing and hunting. Raymond Floyd Parman passed away March 13, 2018 at his home in Rural Benkelman. He was 86 years of age. He was preceded in death by his one and only partner in life, Elizabeth “Betty” Ann (Jones), by his parents and parents-in-law, Miles and Gertrude Jones. Survivors include: sons, Dick Parman and wife, Wanda of Benkelman, Nebraska and Jim Parman and wife, Deborah of Grand Junction, Colorado; Grandchildren: Bryon Parman and wife, Sara of Starkville, Mississippi, Jodi Schneider and husband, Jesse of Benkelman, Nebraska, Bradley Parman and wife, Marissa of Kearney, Nebraska, Rob Beunk of Los Angeles, California, Kris Miner and wife, Alesha of Craig, Colorado, Keith Miner and wife, Brenda of Graham, Washington, Kenny Miner and wife, Cerice of Enders, Nebraska; great-grandchildren: Bobby and Alyssa Schneider, MaKynley, Drake, Caleb and Jacob Parman, Clayton Warner, Zane and Brody Miner, Brittany Turner, Kami Turner and Kole Miner; great-great-granddaughter, Ava Turner; sister, Dora Biber and husband Jim of Grand Junction, Colorado, and sister, Gloria Lutz and husband, Marlin of Benkelman, Nebraska. Memorial services will be 11:00 A.M. (MT), Monday morning, March 19, 2018 at the United Methodist Church in Benkelman with Pastor Rod Heilbrun officiating. Military Honors will take place at the church. No visitation; Floyd chose cremation. A private family inurnment will take place at a later date. A memorial has been established in Floyd’s memory. Online condolences may be left at liewerfuneralhome.com BENKELMAN MEMORIAL CHAPEL IS ENTRUSTED WITH ARRANGEMENTS

Raymond Floyd Parman was born to Floyd and Ethel Dora (Enfield) Parman on June 16, 1931 in Benkelman, Nebraska. He attended school in Benkelman and graduated from Benkelman High School in 1948. After high school he was inducted into the United... View Obituary & Service Information

The family of R. Floyd Parman created this Life Tributes page to make it easy to share your memories.