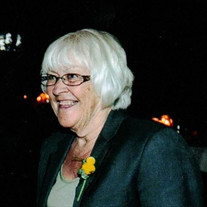 Peggy Ilene Miller Bernard, loving Wife, Mother, Grandmother and Great Grandmother, passed away surrounded by loved ones on January 20, 2020 at the University of Colorado Health following complications from a double lung transplant. Peg passed doing what she felt would allow her to chase her many grandkids and great grandkids around the house and yard and no longer be tied up to her oxygen. Peggy was born May 19, 1953, in Benkelman to parents Eugene & Ilene (Bishop) Miller. She attended and graduated high school in Benkelman in 1971. Peg grew up the 2nd oldest of 4 children; she was the instigator of the bunch but the one to never take the blame. On May 29th, 1971, she married Gary Bernard and went on to have 5 children, 17 grandchildren and 3 great grandchildren. Peggy spent most of her life working at the Dundy County Hospital filling many different roles and responsibilities. She was always the most recognizable face at the Hospital and one that many always sought out when they needed help or had an issue. Her biggest passions were her children, grandchildren and great grandchildren. She was always busy with some sort of activity involving the children and would drop anything to be with them. Preceding her in death were here Parents, Eugene & Ilene Miller: Mother and Father In-Law, Harold and Ethel Bernard: Sister In-Law, Sheryl Janousek: Brother In-Laws, Richard Els and Al Voge; and Grandson Kaleb Sis. Survivors include husband, Gary Bernard of Benkelman; five children: Michele Stryker and husband, Patrick, of Stockbridge, GA., Tonya Fagot and husband, Jason, of Lexington, Ne., Chad Bernard and wife, Zoe, of Colorado Springs, Co., Travis Bernard and wife, Sabrina, of Benkelman, Ne., and Shawn Bernard of Dallas, Tx; seventeen grandchildren: Zachary Sis, Alyssa Raymer, Tessa Sis, Colton Sis, Ethan Sis, Trey Fago, Brady Fago, Ashley Fago, Jacob Bernard, Maizi Bernard, Maddox Bernard, Therran Bernard, Briahana Schwarz, Bianca Bernard, Leila Bernard, Tristauna Bernard and Levi Bernard; and three great-grandchildren: Ayden Raymer, Avery Raymer and Addilyn Rose; sisters: Cindy Els of Benkelman, Becky Brown of Benkelman and Jyl Voge of Lincoln, Nebraska. Memorial service will be held Wednesday morning, January 29, 2020, 10:30 A.M. (MT) at the Benkelman Community Building, Benkelman, NE, with Mr. Spencer Parker officiating. No visitation, Peggy chose cremation. A memorial been suggested to the Dundy County Hospital Foundation. Online condolences may be left at liewerfuneralhome.com BENKELMAN MEMORIAL CHAPEL ENTRUSTED WITH ARRANGEMENTS

The family of Peggy I Bernard created this Life Tributes page to make it easy to share your memories.