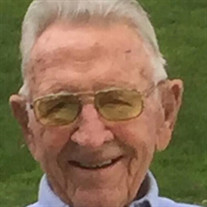 • Paul Martin Erdman June 17, 1924 - February 16, 2018 Paul Martin Erdman, age 93, of Benkelman, passed away quietly in his sleep, following a brief illness, February 16, 2018, at Dundy County Hospital in Benkelman. Paul was born in Longmont, Colorado on June 17, 1924 to Ernst and Blanch Stamper-Erdman, the oldest of four children. He was baptized in 1924 at St. Paul’s Lutheran Church, Amherst, Colorado. Growing up in Dundy County on a ranch north of Haigler, he began his education riding a horse cross-country to school at District 77. He attended eighth grade at St. Paul’s Lutheran Day School in Amherst, Colorado where he was confirmed in 1938. He graduated Curtis School of Agricultural in 1942 and enlisted as an aviation cadet in the US Army Air Corps. He always regretted that he was never deployed overseas, because he was still in training when the war ended. On June 20, 1947 he married Elizabeth (Betty) Ann Bauer of Benkelman They were blessed with four daughters, Beth, Christine, Annie, and Julie. Paul worked as the foreman of the Nichol’s ranch north of Haigler before moving to Benkelman in 1954. Paul held a number of jobs in the Benkelman area, but is best remembered as a piano tuner/technician in the tri-state area. In the community, he and Betty were proprietors of Erdman Music for over 45 years. Paul served as mayor of Benkelman in the 1980’s. He was a member of the Southwest Nebraska Racing Association, Masonic Lodge and Eastern Star, Benkelman school board, Benkelman Chamber of Commerce, Dundy County Fair board, Dundy County Red Cross, church boards, Martin F. Bowles American Legion, Piano Tuner Guild and the Dundy County Historical Society. He loved building and racing stock cars. He was instrumental in getting the racetrack built at the fairgrounds where he flagged races. He also loved flying airplanes. In his later years, he still enjoyed building and flying radio controlled airplanes and valued his friendships with other RC enthusiasts. He loved canoeing, water skiing, hunting, gardening and camping with the family. He was a vibrant part of the community, and most Sunday mornings before church would find Paul visiting friends and family in Hester home. He was a familiar sight riding his bicycle down Main Street into his later years. In the 1960’s, Paul and several local music promoters created Country Music Benkelman. This ever changing group welcomed performers of many ages and types of music. For over a half a century, this group performed for community fund raisers and at local events. This musical legacy and love of music lives on in his own family as well as in countless guitar students and area musicians. Paul was preceded in death by his wife of 65 years, Betty. He was also preceded by his parents, Ernst and Blanch Stamper-Erdman, brothers Earl Erdman and Dean Erdman, sister-in-law and brother-in-law Dale and Gwen Bauer, sister-in-law Virginia Norsworthy. He leaves to rejoice in his salvation his four daughters, Beth (Rich) Kollmorgen of Stratton, Neb.; Christine (Mike) Collier of Brea, Calif.; Annie (Chris) Pursley of Enders, Neb.; and Julie (Jerry) Ott of Holdrege, Neb.;13 grandchildren, and 22 great-grandchildren. He is also survived by his sister, Mae (Art) Wilkens of Stockton, Ks, and his sisters-in-law Esther Erdman and Ilene Erdman, as well as his brother-in-law Jim Norsworthy and a host of nieces and nephews. Memorials in his name have been established to the Dundy County Hospital and Dundy County Senior Center. Funeral services will be held Friday morning, February 23rd, 2018, 10:00 A.M. (Mountain Time) at the St. Paul’s Lutheran Church of Rural Wauneta, Nebraska, with Pastor Keith Wellman officiating. Inurnment will follow at the Benkelman Cemetery starting at 11:30 A.M. (Mountain Time). The public is welcome to join the Erdman family at the Benkelman Community Building, Benkelman, following the inurnment services, for food and fellowship. On line condolences may be left at liewerfuneralhome.com BENKELMAN MEMORIAL CHAPEL ENTRUSTED WITH ARRANGEMENTS

The family of Paul Erdman created this Life Tributes page to make it easy to share your memories.