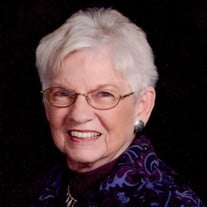 Patricia Ann Dobney, 89, of Imperial, Nebraska, passed away on October 11, 2017, at the Chase County Community Hospital. Pat was born September 13, 1928, in Hastings, Nebraska to Charles and Ruth (Nellis) Warrick. She graduated from Hasting High School in 1946, and went on to Hastings College, where she played flute in the marching band. She transferred to the University of Nebraska where she was a member of Kappa Alpha Theta sorority. After earning her Bachelors degree in education in 1950, she taught elementary school in Colorado Springs, where she met her future husband, Lloyd, a civil engineer working for the Army Corps of Engineers. Lloyd and Patricia were married on June 10, 1956 in Norfolk, Nebraska. They started their married life in Verdun and Paris, France. Lloyd’s work also took them to Weisbaden, Germany, where they lived for three years. They enjoyed traveling to many beautiful countries and locales during their time overseas. They eventually settled in Omaha, Nebraska, where they raised their family. They had two children, Douglas and Elizabeth. While in Omaha, Pat earned her endorsement as a media specialist. She went on to serve as a media specialist in Elkhorn, Nebraska Public Schools. She and Lloyd retired to Colorado Springs in 1991. They moved to Imperial, Nebraska in December of 2016 to be closer to family. Patricia was a devoted and loving wife, mother, and grandmother. She took special pride and joy in her grandchildren. She was an avid reader. She was a champion and supporter of education, and enjoyed sharing her love of literature and language. She was clever and funny, with a wonderful sense of humor, and a happy, positive outlook. She connected easily with others, and was unfailingly kind. She enjoyed the simple pleasures of a crossword puzzle, a cup of coffee, and a chat with a friend. She was a member of St. Michael the Archangel in Colorado Springs for 25 years, and most recently, a member of Zion Luthern Church in Imperial. She was a member of Kappa Alpha Theta alumni, and the P.E.O. sisterhood. Patricia was preceded in death by her parents, Charles and Ruth Warrick; her brothers, Charles “Chick” Warrick and Richard Warrick; and her beloved son, Douglas Harold Dobney. Survivors include her husband, Lloyd, of Imperial; daughter, Elizabeth (Dirk) Haarberg of Imperial; daughter-in-law, Rosemary Dobney of Fresno, California; grandchildren Charles (Danielle) Haarberg, Sam (Kristen Jussel) Haarberg, and Alyson Dobney. A memorial service will be 10:30 A.M (MT), Monday morning, October 16, 2017 at Zion Lutheran Church in Imperial with Pastor David Kahle officiating. A private inurnment of ashes will take place at a later date at St. Michael the Archangel in Colorado Springs, Colorado. No visitation; cremation was chosen. Memorials have been established to the Zion Lutheran Church of Imperial and to the Imperial Community Foundation Fund. Online condolences may be left at liewerfuneralhome.com LIEWER FUNERAL HOME IS ENTRUSTED WITH ARRANGEMENTS

The family of Patricia Ann Dobney created this Life Tributes page to make it easy to share your memories.

Patricia Ann Dobney, 89, of Imperial, Nebraska, passed away on...