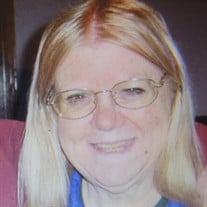 Pamela Ridlen Pamela Sue Ridlen was born May 9, 1954, in Sioux City, Iowa, to Larry M. and Hertha (Ahrendsen) Holien. Pam grew up in Colorado Springs, Colorado, and graduated from William J. Palmer High School in 1972. That summer, while attended one of the many rodeos, she met her soon to be husband. On November 17, 1972, Pam was united in marriage to David M. Ridlen, in Colorado Springs. In the spring of 1973, the couple moved to Imperial, Nebraska. Pam worked at John Deere, D&G Liquors, Laker’s Delight, the Imperial Manor, Dundy County Sheriff’s Office and the Chase County Sheriff’s Office. Pam was also well-known cake decorator. For 47 years, she brought smiles, tears, and laughs, to many with her unmatched frosting and crazy candles. Pam was a 37-year member of the Imperial EMS Department and received many awards during her time there. She was also a member of the Community Players for several years while enjoying co-ed softball games at Enders, especially the snowball games. Pam loved her music, Alabama, The Oak Ridge Boys, and Alan Jackson. She enjoyed car racing, bowling, and rodeo. She especially enjoyed working with her sister, Pat, on the Imperial EMS Haunted House for many years. Pam loved her family and gave all her support to whatever they were involved in, but most of all, she loved her cats. Pam was known for her loving disposition, warm heart, and the long blonde reddish hair that never faded. Pam passed away Tuesday evening, February 8, 2022, at the Haxtun Hospital, Haxtun, Colorado. Pam was 67 years of age. Survivors Include: Son: Dave Ridlen and wife, Amanda, of Haxtun, CO Grandson: Gage Palser of Chadron, NE Son-In-Law: Troy Palser of Chadron, NE Brother: Larry “Rusty” Holien and wife, Cyndee, of Peyton, CO Niece: Stacy Reasoner of Imperial, NE Pam was preceded in death by her parents, husband; David, son; Dusty, daughter; Debra, and sister; Pat Hammel. A private family celebration of life will be held at a later date. Memorials, In Pam’s Memory, have been suggested to the Haxtun Community Credit Union, 229 N. Colorado Ave, Haxtun, CO 80731 On line condolences may be left at liewerfuneralhome.com LIEWER FUNERAL HOME ENTRUSTED WITH ARRANGEMENTS

The family of Pamela S Ridlen created this Life Tributes page to make it easy to share your memories.