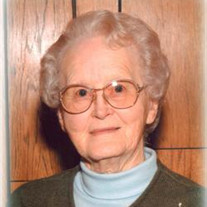 Norma Surber Norma Jean (Hust) Surber was born on January 12, 1922, near Champion, Nebraska, to Leon and Ina (Douglass) Hust. She was raised in rural Chase County, graduating from Chase County High School in 1940. After graduation, she lived with her Grandparents and worked at the J.C. Penney’s store in Imperial. On July 9, 1944, Norma was united in marriage to Howard Ivan Surber at the United Methodist Church Parsonage by Rev. Arnison, making their home in the rural Lamar area. In 1946 they moved to the farm northwest of Imperial where they made their home until they retired. Five children were born to this union: Linda Sue, twins James Ray and Janet Kay, Jerry Howard and Mary Alice. Norma was very active with the 4-H program being a leader while her children were growing up. She belonged to one of the first Extension Clubs in Chase County and served as an officer many of those years. She was a member of the United Methodist Church in Imperial taking an active role in United Methodist Women and Circle. She had a love for the Lord that she tried to instill in her children. As a farm wife, Norma was Howard’s partner in the farming operation. Cooking for harvest crews, raising chickens and a garden, helping on butchering day and helping feed cows during the winter are just a few of the ways she helped out. For a few years she cleaned the Dist. 22 School House where her children attended school. Later she sold Amway products and Artex and Trichem paints. She also helped Howard deliver cream, milk and eggs to Imperial families twice a week. Along with raising her family, she kept busy. Norma’s hobbies included sewing for her family, knitting, crocheting, quilting and reading. She was a great cook and loved showing things she made at the fair. Many received her knitted dish cloths or pot holders as gifts. She was a member of a community knitting group that had been started by her mother and also a member of the local quilt guild. She loved to read and read many books to her family as they were growing as well as on her own. After retirement, they moved into Imperial and stayed active by visiting neighbors, delivering meals from the Senior Center and sharing the lives of their children. Health issues made that difficult in time. The last ten years of her life were spent in Imperial Manor/Parkview-Heights. She was instrumental in starting a Bible Study Group there. She also entertained her knitting group, family gatherings and many friends and family who stopped to visit. She had a love for life that will be missed. Norma passed from this life at the age of 92 on the evening of July 9, 2014, her Wedding Anniversary. She was at the Imperial Manor Nursing Home at the time. She was preceded in death by her parents, husband Howard, daughter Janet Kay, sister Nancy Tinkham, and great-grandson Thomas Howard Martin. Survivors Include: Daughter: Linda Martin and husband Jesse of Sutherland, NE. Son: Jim Surber and wife Dianne of Lemoyne, NE. Son: Jerry Surber and wife Pamela of Torrington, WY. Daughter: Mary Lee and husband Charley of Lamar, NE. Grandchildren: Aaron Martin and wife Carole, Matt Martin and wife Alicia, Erik Martin, Darcey Kramer and husband Jared, Thom Martin and wife Jill, Pamela Hand and husband Chris, Troy Surber, Theresa Gerih and husband Shannon, Robert Wasmuth, Ediann Goulding, Lee Douglas, Angela Schmidt and husband Rodney, Jacqi Rabago, Robert Lee and wife Toni, Sarah Wixom and husband Travis and Michael Lee. Great-grandchildren: Ashley, Jeremy, Amielia, Mattie, McKenzie and Zoey Martin; Emily Gray; Alexis, Samuel, Jackson and Mathew Kramer; Jerica, Schon, Zach and Chelsie Korf; Colton and Haley Surber, Cheyenne and Dakota Gerih; Nathan Goulding; Miami Haver; Hailey Ferretti; Jeff and Jacob Schmidt; Kyrrah, Dominic and Adysyn Rabago; Logan, Mikayla and Abby Lee; Tristan, Tanner, Sierra and Savannah Wixom. Great-great grandchildren: Ashton, Lilly, Evelynn, Easten, Xavier and Xenifer. Sister: Laurel Poland of Sargent, NE. Sister-in-laws: Clara Severin of Los Alamitos, CA, and Millie Stinnette of Pasco, WA. Brother-in-law: Larry Tinkham of McCook, NE. Many nieces, nephews and friends. She will be greatly missed. Funeral services will be held Monday afternoon, July 14th, 2014, 2:30 P.M. at the United Methodist Church of Imperial, with Pastor Valera Heydenberk officiating. Interment will follow at Mount Hope Cemetery, Imperial, Nebraska. Visitation will be held Sunday afternoon, July 13th, 2014, 2:00-6:00 P.M. at the funeral home in Imperial. Memorials have been established to the Imperial Public Library and the Rainbow Promise Preschool. Online condolences can be left at liewerfuneralhome.com LIEWER FUNERAL HOME IN CHARGE OF ARRANGEMENTS

Norma Surber Norma Jean (Hust) Surber was born on January 12, 1922, near Champion, Nebraska, to Leon and Ina (Douglass) Hust. She was raised in rural Chase County, graduating from Chase County High School in 1940. After graduation, she... View Obituary & Service Information

The family of Norma Surber created this Life Tributes page to make it easy to share your memories.