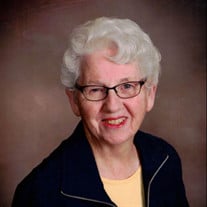 NETTIE NORDHAUSEN Nettie Amanda (Johnson) Nordhausen was born February 16, 1938 to Ivar Jr. and Susie (Hasson) Johnson in Royal, Nebraska. She was baptized into the Christian faith at Fairview Methodist Rural Church on April 25, 1943. Nettie, the youngest of 5 siblings, grew up in the rural Royal/Neligh area and attended school there until her family moved to Chase County in southwest Nebraska when Nettie was 14 (1952). At age 16, Nettie graduated from Chase County High School in 1954. Nettie had an adventurous spirit and worked at various places from Estes Park, CO to Lincoln, NE before coming back home to work in Imperial at the Chase Co. Extension Office. She was very active in the Nebraska Rural Youth Organization during this time, which was a group for young men and women, ages 18-30, interested in the improvement of rural living. Nettie notably served as the first female president of this organization from 1962-1963. Nettie married Clinton Duane Nordhausen on April 4, 1964 at the United Methodist Church in Imperial. One of the most memorable parts of the day was coming out of the church to many inches of fresh snow. On April 13, 1965 Nettie confirmed her Christian faith at Zion Lutheran Church of Imperial. Faith, family, and farming are 3 things that describe Nettie’s life’s work after marrying Clint. Nettie was an active member at Zion Lutheran Church where she taught Sunday school and VBS. Nettie was also active in the Willing Workers Ladies Aid. Nettie and her dear friend Arleen Kunnemann were often seen buzzing around Zion serving in various capacities. Nettie worked alongside Clint on their family farming operation while raising their two daughters and could just as easily be found scooping out a grain bin as baking fresh bread and rolls in her kitchen. She loved to sing with her daughters and nieces and nephews in the car, and was always ready and willing to have the cousins come stay at the farm to make memories with Ann and Jody. She continued her involvement in the community by serving as a 4-H club leader and volunteer at the Chase Co. Fair for many years, and she was an active member of the Unionette Extension Club. More recently, Nettie was the proud grandma of her three grandkids, and enjoyed attending their various competitions, concerts, and other activities. Knowing no stranger, Nettie had a smile and a kind word for anyone. Nettie was called to her heavenly home April 14, 2022 at age 84. Nettie was preceded in death by her parents, sister Lucille Bauerle, brothers-in-law Bob Willats and Paul Vlasin, and good friends Arleen & Corky Kunnemann. Those left missing her dearly include her husband of 58 years Clinton Nordhausen; daughters Ann (Paul) Cain and Jody (Sam) Most; grandchildren Micah, Amanda (Matt Hoffmann), and Caleb Most; siblings Kathryn Willats, Byron Johnson, and Richard (Jean) Johnson; sisters-in-law Nancy (Wayne) Burge and Lana Vlasin; brothers-in-law Burdette Bauerle and Errol (Patty) Nordhausen; and many nieces, nephews, extended family, and friends. Funeral Services were held Tuesday morning, April 19, 2022, 10:30 A.M. at the Zion Lutheran Church of Imperial, with Pastor Keith Wellman, Pastor Paul Cain and Vicar Andrew Hill officiating. Interment will follow at Mount Hope Cemetery, Imperial. Visitation was held Monday afternoon, 2:00 P.M -6:00 P.M. (With the family present from 2:00 -4:00 P.M.) at Liewer Funeral Home of Imperial. Memorials, in Nettie’s memory, have been suggested to the Zion Lutheran Church of Imperial or the Chase County 4-H Council. Online condolences may be left at liewerfuneralhome.com LIEWER FUNERAL HOME ENTURSTED WITH ARRANGEMENTS

The family of Nettie A Nordhausen created this Life Tributes page to make it easy to share your memories.