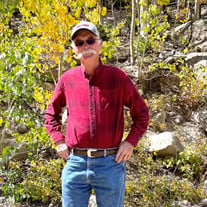 Raymond Neal McSwain was born January 24, 1956, in Enid, Oklahoma, to Helen (Nichols) and William “Bill” McSwain. Neal grew up in Loveland, Colorado, and graduated from Loveland High School in 1974. He went on to further his education at Colorado State University in Fort Collins where he graduated with a bachelor’s of science in Landscape Management. On June 30, 1978, Neal married Libbie Wride in Loveland. The couple moved to Fort Collins and their first daughter, Kelley, was born in 1980 and their second daughter, Holly, was born in 1984. While living in Ft. Collins, Neal worked in landscape and maintenance, most notably at Mill Brothers and at Colorado State University. Neal met Helen Louise Swigert in Ft. Collins and the two were married on March 17, 2005. Neal and Helen lived in Ft. Collins until 2012 before relocating to Stratton, Nebraska. From there, they moved to Benkelman and into their dream home (the Hester Mansion) in May 2017. In Nebraska, Neal worked in the Post Office and as town socialite. For 30 years, he was also private contractor for lawn mowing and horticulture, which is what brought him the most joy in every place he lived and fulfilled his need to connect to nature and community. Neal was a tender of roses and perfectly mowed lawn lines. Neal was an avid banjo player, singer and lover of bluegrass music. He was the lead banjo player in the “Old Time Pickers”. Neal was known for his infectious smile and catchphrase “damnit”. He was a collector of red flannels and all things cozy, he smelled like the fresh cut grass and bananas. Neal was a storyteller, with a freakish memory for details. He especially loved spending time with his family and was affectionately called “Poppa Buckets” by his grandchildren. Neal was a founding member of Harmony Presbyterian Church in Ft. Collins, Colorado, and an active member of Zion Lutheran Church in Benkelman, Nebraska. Neal passed away October 27, 2021, at his home in Benkelman. He was 65 years of age. Neal was preceded in death by his parents Bill and Helen McSwain; Brother Christopher Lee; and Step Daughter Kristi Ohrman. Survivors include: Wife Helen McSwain of Benkelman, NE. Daughter Kelley Harkcom and husband Rick of Earlysville, VA. Daughter Holly Carroll and husband Steve of Manly, Australia. Stepson Travis Lutz and wife Pam of Benkelman, NE. Stepson Nick Tanner Lutz and husband Ryan Gensler of Denver, CO. Grandchildren: Elvie and Caden Harkcom; Baby Carroll (due Feb 2022); Tana Jo, Tyler and Tobi Ohrman; and Stella and Saxton Lutz. Siblings: Brother Randy McSwain and wife Anita of Greeley, CO. Brother Brent McSwain and wife Kim of Lakewood CO. Funeral Services for Neal will be held Tuesday, November 2, 2021, 10:00 A.M. (MT), at Zion Lutheran Church in Benkelman, Nebraska, with Rev. Jim Gleason officiating. Interment will follow at the Benkelman Cemetery, Benkelman, Nebraska. A memorial has been established in Neal’s memory to the Dundy County Ag Society. On-line condolences may be left at liewerfuneralhome.com. BENKELMAN MEMORIAL CHAPEL ENTRUSTED WITH ARRANGEMENTS

Raymond Neal McSwain was born January 24, 1956, in Enid, Oklahoma, to Helen (Nichols) and William &#8220;Bill&#8221; McSwain. Neal grew up in Loveland, Colorado, and graduated from Loveland High School in 1974. He went on to further his education... View Obituary & Service Information

The family of Neal McSwain created this Life Tributes page to make it easy to share your memories.