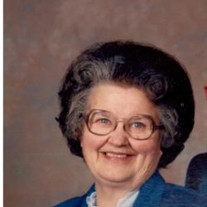 Naomi Brynoff Naomi Earlene Brynoff died Thursday, March 19, 2015, at the Hester Home in Benkelman, Nebraska. She was born on December 4, 1927, in Dundy County to Earl and Martha Richards. Naomi was the eldest of two children. Naomi attended the local country grade school and finished her education as a graduate from Benkelman High School. After high school, Naomi taught elementary school for several years at several of the rural one teacher schools in Dundy County. It was during this time that she met her future husband, Nels P. Brynoff. They corresponded while he was serving his country in the Army of occupation in Japan. They were married at her home with his father officiating on February 27, 1948. The couple farmed land in Wauneta, Grant, and south of Imperial, Nebraska, where they raised livestock and grain. It was while living on the farm south of Imperial that they became the proud parents of two little sisters, Esther Ann and Wanda Lucille on December 7, 1959. Life was always filled with adventure whether it be work on the farm, celebrations with family, or vacations in Colorado. Naomi loved singing at her church in Benkelman, her gardening, preserving the produce by canning and freezing, sewing, and leading and teaching her skills through 4H; which she was a leader before becoming a mother, during her young daughters’ childhoods, and after. She was well known for her baking of pies, fudge, and divinity. At many Easter celebrations she would bring a bunny cake with green dyed coconut grass and jelly bean eggs around the white coconut covered bunny. Naomi was active on the PTA board at Enders Grade School where their daughters attended school. Naomi and Nels’ final home was on the old Richards Homestead north of Benkelman; where they made irrigation improvements and raised bumper crops of grain. Naomi was preceded in death by her sweetheart Nels, her brother Boyd Richards, parents Earl and Martha, son-in-law Jim Adkinson, and aunt Mary W. Williams. Survivors include: Daughters: Wanda Adkinson of Benkelman, NE. Esther Terrell and husband Dave of Omaha, NE. 3 Grandchildren: Kristine and husband Jeff, Katie and Jordan. Great-grandson: Wyatt. Brother-in-laws, sister-in-laws, nieces and nephews. Naomi’s smile, sparkle in her eye, winning personality, and deep faith in Christ will be missed until we meet again in Heaven. “She hath done what she could.” Mk 14:8 Funeral Services will be held Saturday Morning, March 21st, 2015, 10:30 A.M. (MT) at the Trinity Baptist Church of Benkelman, Ne. with Pastor Paul Folk officiating. Interment will follow at the Benkelman Cemetery, Benkelman. Visitation was held Friday afternoon, March 20th, 2015 2:00 P.M. – 6:00 P.M. (MT) at the Trinity Baptist Church of Benkelman, NE. In lieu of Flowers, memorials have been established to the Omaha Children’s Hospital and the Lion’s Eye Bank. Online condolences can be left at liewerfuneralhome.com BENKELMAN MEMORIAL CHAPEL IN CHARGE OF ARRANGEMENTS

Naomi Brynoff Naomi Earlene Brynoff died Thursday, March 19, 2015, at the Hester Home in Benkelman, Nebraska. She was born on December 4, 1927, in Dundy County to Earl and Martha Richards. Naomi was the eldest of two children. Naomi... View Obituary & Service Information

The family of Naomi E Brynoff created this Life Tributes page to make it easy to share your memories.