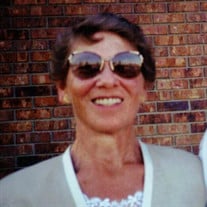 Nancy Celeste (Shaw) Case, 89 of Imperial, Nebraska passed away on June 6, 2019 at the Imperial Manor in Imperial, Nebraska. Nancy was born in Lancaster, Missouri on April 1, 1930 to Robert Forrest and Gladys Claire (Wardlow) Shaw. She was the youngest of five children. At the age of 5, the family relocated to Nebraska settling in Chase County west of Champion. Nancy went to grammar school at District 17, a one room rural school house until 8th grade and graduated from Chase County High School in 1948. On January 27th 1951, she married Bob Case. They welcomed a son Mitch and daughter Nanette into their home. Bob and Nancy moved their family to Southern California in 1958. The family spent 20 years living in California before moving back to Nebraska to be closer to family. Nancy spent numerous years being a para educator both in California and Nebraska. Her grandchildren remember their Grandma Moo spending summer hours tutoring students along with keeping up with her vegetable garden in addition to many hours of mowing. Yet, there was always time to play cards. Nancy’s passion for learning didn’t just happen during school hours. She eagerly encouraged her children, grandchildren and great children to work hard and to be the best they could be. She celebrated all of their accomplishments. Upon retirement, Bob and Nancy moved to Imperial, Nebraska where they spent time catching up with old friends and making new. Their family spent every Chase County Fair parade sitting with them while munching on popcorn and apples. Proceeding her in death are; her parents (Robert and Gladys Shaw) her husband (Bob Case) along with all of her siblings, Brother Bud Shaw and wife Jo, Sister Ann Glover and husband Dale, Brother Betts Shaw and wife Jean and Brother Alva. She is survived by her son Mitch Case of Imperial, Nebraska and daughter Nanette Bilka of Imperial, Nebraska. Grandchildren – Charlesa Kline and husband JR of Imperial, Nebraska, Robert Case of Sidney, Nebraska, Joseph Bilka and wife Lyndsey of Holdrege, Nebraska, Janine Ruscetta and husband Vince of Denver, Colorado, Joni Case of Kearney, Nebraska. Great-Grandchildren – Quentin Johnson, Averi Bilka, Hadli Jo Bilka, Cambell Grace Kline, Corbin Kline, Gabe Bilka. Sisters in law – Donna McNair, Marian Shaw and many nieces, nephews and friends. Graveside services will be June 17th, 2019 ; 11:00 A.M. (MT) at the Mount Hope Cemetery in Imperial with Pastor JR Kline officiating. No viewing or visitation. A memorial has been established in Nancy’s memory. Nancy requested that no flowers be sent to services; memorials are suggested instead. Online condolences may be left at liewerfuneralhome.com Liewer Funeral Home is entrusted with arrangements.

Nancy Celeste (Shaw) Case, 89 of Imperial, Nebraska passed away on June 6, 2019 at the Imperial Manor in Imperial, Nebraska. Nancy was born in Lancaster, Missouri on April 1, 1930 to Robert Forrest and Gladys Claire (Wardlow) Shaw. She was the... View Obituary & Service Information

The family of Nancy Case created this Life Tributes page to make it easy to share your memories.